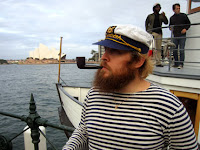 “We were stranded on the rocky red shores of Djibouti, just Captain Pete, the First Mate, and me: Billy Beers, Pirate Entertainer. The rest of our miserable crew had died when our ship, The Spitz Swallow, was attacked by a school of strident tuna. As I floated towards land on a barrel full of monkeys (don’t ask), I watched as the fish mixed one pirate with some mayonnaise, salt, pepper and some fresh chopped onion and then ate him alive on top of some Melba toast. As the tide tugged me towards shore, I could see the burning wreck that was our ship slowly slip beneath the waves. How a school of strident tuna set fire to our ship, I will never know. Needless to say, t’was a fearsome, loathsome sight.

“The sun bore down on us as Captain Pete, his First Mate and I struggled ashore. For you lubbers who will never know the perils of the sea, the Indian Ocean is a tempestuous mistress; all three of us suffered from swimmer’s ear that afternoon. There was no sign of civilization, not a single sign of life for miles and miles around. There were only rocks, oodles and oodles of red rocks stretching out for as far as the eye could see.

“’Captain Pete,’ whined the First Mate, ‘what are we going to do?’

“’You’re a pirate. You tell me. What do you think, Billy?’ asked Captain Pete. I scoffed haughtily.
“’I don’t know about you scallywags, but I’m going to eat me a monkey from this barrel,’ quoth I. However, because none of us had brought our barrel openers, we were forced to find an alternate way of getting to the sweet monkey meet. The Captain suggested hitting it repeatedly with our hands. The First Mate offered to scold the monkeys into opening the barrel from the inside, however when asked he admitted that he was not fluent in monkey, having only taken two semesters at Pirate University and so lacking the proper vocabulary. Finally, I decided to simply throw the barrel into the air and let it crack open upon the rocky red coast.

“Up, up into the air the barrel flew, and then down onto the rocks it fell. With a mighty crack, the barrel shattered and there were instantly twenty monkeys running about the beach. We three tried to catch a monkey but, alas, they all eluded us. Luckily, one of the monkeys left their monocle in the barrel, and so we were able to trap him when he came back to retrieve it.

“The First Mate seasoned the monkey with a touch of salt and pepper, olive oil and a little cumin which we found on the rocky red shores of Djibouti, and Captain Pete made a fire. I practiced some vocal warm-ups, as I did not want my voice to lose any of its trademarked resonance during our stranding.

“We were just about to dig in to our monkey meal – the First Mate had made a lovely little field greens salad with fresh Gorgonzola and candied pears which we found on the rocky red shores of Djibouti – when suddenly we were set upon by a tribe of angry pygmies who were vacationing in Djibouti. They were short and fierce, and there must have been four hundred of them, each one craving a delicious piece of monkey meat. Captain Pete and the First Mate drew their cutlasses and began indiscriminately hacking away at the intruders, but in the end they were overpowered by sheer numbers.

“I could see that it was up to me to save us again. Luckily, if there’s one thing an angry tribe of vacationing pygmies loves, it’s a show stopping musical number. ‘Don’t worry, guys. I have this handled,’ said I. They don’t call me ‘Pirate Entertainer’ for nothing.

“Obviously, I didn’t have the flashy lighting or the sequined costumes that I was accustomed to but, given the circumstances, I performed a rousing a capella version of the theme from TV’s ‘The Love Boat.’ The pygmies stopped in their tracks. A long silence settled over the beach. I could hear a few pair of tiny hands clapping somewhere among the pygmy horde.

“’Brilliant performance,’ whispered the First Mate, wiping a tear from his eye. ‘I hope it worked.’

“At that moment, the tiniest pygmy of all – who I can only assume was the leader – stepped forward. He was no taller than my calves. He looked up at me, his tiny little eyes glimmering in the sun. He uttered something in pyg-latin. I shook my head, so he repeated himself.

“The pygmy king snorted. He turned around, surveying the rest of the pygmies and then, lifting his hands up into the air, shouted something else. The crowd of pygmies raised their spears into the air and began to press forward towards my crewmates and I.

“I wracked my brain. ‘I don’t know. Do you think they’d like the theme from Friends?’

So, it seems as though I need to learn to read. I just "flagged" your blog, thinking I was creating a way to find my way back here again, and then realized what I had actually done was flagged your blog for "objectionable content". Hahaha