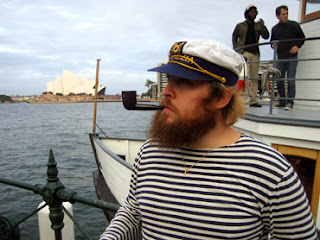 “That night I returned to my hammock down in the powder magazine with fanciful thoughts flitting through my head; thoughts of Puppyfish, and what they might look like. I wondered why Salty had called it a “dread” Puppyfish. I also wondered if the Puppyfish has an adorable wet nose. Growing up on the soil-farms of my native Wisconsin, I had always wanted a puppy. And a fish for that matter. Alas, my father was allergic to dogs, so we could never have one. And my mother had an irrational fear of fish. We did, however, have a pet rock named Ignatio. One of the saddest days of my life was the day we had to put Ignatio down.

“It was getting late, and I resolved to put these thoughts of long-lost pets out of my head. I sang a little song that I wrote myself (“Sleepy-by, Billy Beers, an R&B Lullaby,” which will be my first single once my Pirate recording artist career takes off) and slowly I slipped off into slumberland.

“But only for the moment.

“It must have been very early when I was knocked out of my hammock by some indescribable force. I landed face down on the popsicle-stick deck of the powder room. The ship was shaking, as though it had been hit by some gigantic wave. I crawled out of the room and up onto the deck.

“Once I reached topside, I saw the other Pirates scrambling around the deck, shouting “Avast!” and “Y’arr!” and other Piratical-type terms. I managed to pull myself up to standing using the main mast. Just as I got my bearings, Salty ran by, carrying an armful of sausages from the galley.

“’Salty!’ I shouted. ‘Where are you going with that armful of sausages?’

“’T’is the dread Puppyfish! She’s come to claim the boat as her own. I warned the captain. Ay, warn him I did. But nobody listens to poor Salty. Not the captain, not Salty’s seventeen children and sure as you’re born not the Puppyfish.’

“’Right, but the sausages?’

“’What, these?’ Salty, seemed to have forgotten that he was carrying an armful of sausages. He looked down for a moment. ‘I’m trying to assuage the damned beast’s thirst for blood with these meat products. Hopefully the creature will be distracted long enough to allow us time to escape.’

“Now, if there’s one thing that I, Billy Beers, love, it’s a giant sausage. I thought to myself, I’ll be damned if I let some cute, adorable creature from hell steal a meal from me.

“Salty shrugged and led me off to the port side of the ship. There, bounding about in the waves, was a giant fish – perhaps fifty feet long – with the head of a baby beagle. Curiously, the Puppyfish’s nose was dry.

“’That answers that question,’ I said to myself. ‘It looks like it just wants to play.’

“’I don’t care what it does, just so long as it leaves us alone. Look out!’ shouted Salty. Suddenly, the Puppyfish bounded towards the boat and slammed into the side. The ship rocked, creaking as it adjusted to the hit. I was knocked to my feet, along with Salty and the sausages.

“The Puppy flipped it’s wagging tailfin at the side of the boat, again sending everyone to the deck. Captain Pete ran over to me. ‘Christ in a handbag, what are we going to do now?’

“I thought for a moment, and then finally, I decided that I would do the one thing that I, Billy Beers: Pirate Entertainer, knew how to do really well. ‘Someone get me a microphone,’ I said.

“Moments later, I was singing the most beautiful version of “Sleepy-by, Billy Beers, an R&B Lullaby” that I could muster. As I reached the bridge, the Puppyfish stopped bounding about, standing still for the moment listening to the song. ‘It’s working,’ shouted the pirates. I finished the song with one of my signature flourishes. There was a long pause. The puppyfish stares at us. The crew stared back.

“The Puppyfish opened it’s mouth and let out a series of loud yelps. Then is bounded directly at the ship, slamming the port side with a renewed fury. The crew fell to the deck.