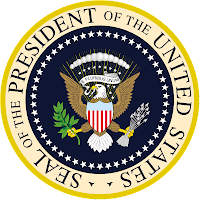 I, Nathaniel Barkell "Alphonso" Topping, do hearby declare my intent to run for the office of the President of the United States in 2040.

I know what you're thinking: 'what kind of idiot announces his candidacy on some piece of shit blog that only three people read?' I figure, if people can announce their candidacies on late night or morning television programing, then why not a blog? Who knows? By the time 2040 rolls around, blogs may be an acceptable and influential form of media. Besides, I have yet to raise the funds to buy off television programs so for now this will have to do.

Speaking of which, 2040 gives me plenty of time to raise the money necessary to bribe, cajole, browbeat and otherwise foist myself off on the American people. As such, I will begin taking donations immediately. Furthermore, I will be "hiring" volunteers to run my campaign, to write my speeches, to harass people over the phone during dinner time and, finally, to give me much needed support in the form of handjobs. I've already come up with the campaign slogan: Nat Topping, SEXY. Your job is half done! So, if any of you young grass-roots oriented coeds are looking to help in any of these aspects, please feel free to stop by my "campaign headquarters." My "campaign headquarters" are located on Mildred Avenue in Chicago, Illinois. You will know the place by the smell.

The genius of running in 2040 is that a: I will have time to raise the money, b: I will be at least 58 years of age, which is just the right age for running out of conscience and c: I will have plenty of time to develop a campaign platform. By the year 2040, the issues will be completely eliminated from campaigning and thus I expect the event to be primarily a popularity contest. To that end, my campaign platform will consist of thinking of ways to make myself look cool. So you can look forward to that over the following 33 years.

In parting, I would like to say that I look forward to a solid 33 years worth of hoodwinking you into voting for me, Nathaniel Barkell "Alphonso" Topping, for President in 2040. In return, I also look forward to being served by you the American people for at least 4 years.

Thank you, and God bless America.

Holy cow, Nat; I'm so glad you said something. I have been thinking about who I might want to be a running mate with me in 2040. I personally don't care if I'm Prez or Veep, so since you've made your preference known, can I be your vice presidential candidate? I don't have any experience now, but I'm planning on being Treasurer on a friend who will be running in 2020, so I will be a greater asset to you when the time comes.

In 2040, I think my platform will be nationalized skin care for all. With your slogan being SEXY, our campaigns will work in tandem with each other.

You don't have to answer now. But think about it.

Put me down for a five dollar donation.

And one hand job.