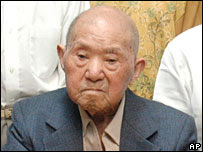 Happy 112th birthday to you, Tomoji Tanabe of Miyakonojo, Japan!

Mr. Tanabe is now, according to the Guinness World Records, the world’s oldest man. What’s the secret to his longevity? Per the BBC:

“Tomoji Tanabe, who was born in 1895, says avoiding alcohol is the secret of his longevity. He drinks milk, does not smoke, keeps a diary and reads the newspaper daily.” He says later in the article, “I want to live indefinitely. I don’t want to die.”

I want to know what newspaper this guy is reading. I don’t speak or read Japanese, but it might be worth learning if that’s part of the cause for his long life. Although, every newspaper I pick up lately makes me want to rip my hair out. Maybe the milk counterbalances those negative effects. I wonder if that’s two percent milk or skim milk, because we all know whole milk kills.

So, for those of you looking to live well beyond 80, avoid alcohol. Also, avoid cigarettes. And don’t go outside too often. And probably avoid television – mom used to tell me that it rots the brain. In fact, just avoid fun altogether. Avoid fun like the plague.

For anyone interested in joining me, I will be celebrating the life of Tomoji Tanabe tonight by downing Saki shots, smoking four packs of unfiltered cigarettes and snorting cocaine off of a prostitute’s chest (pending the location of an acceptable disease-free prostitute). If I don’t post anything tomorrow, you will know that it’s been a successful celebration. Also, call an ambulance.