Evidently Clowns have invaded the Zeitgeist lately. Take a look at this article (courtesy of some yahoo calling himself "Enya's Assassin" on my Comments section).

To sum up an already short article, here's the gist: children hate clowns.

As though this were some great revelation. And, of course, the initial reaction is to blame Steven King's "It" and Batman's Joker for ruining clowning for us all. But think about it: what's not scary about a clown? A clown in and of itself is a weird, creepy thing. I mean, here's a grown man who has caked on white and red make-up to disguise his face, who wears oversized multicolored pants, and who spends the day trying to make friends with little children. I'm not saying that's suspiciously pervy. I'm just saying that... well, no I guess that is what I'm saying.

I would wager that the best a well-intentioned clown can reasonable hope for is a child who is, at best, "guardedly suspicious" of clowns. As far as I know, and feel free to leave a corrective comment for me in the comment section, nobody loves clowns.

Of course, a whole lot of childrens literature and entertainment seems meant to freak the hell out of little kids. Barney the dinosaur was a purple Tyranosaurus Rex. Would you let your child spend his or her day singing and dancing with a notoriously carnivorous prehistoric beast? Would you let your child hang out with Barney's friend B.J.? I didn't think so. How about with a Teletubby? Talk about suspiciously pervy. Look at these bastards: 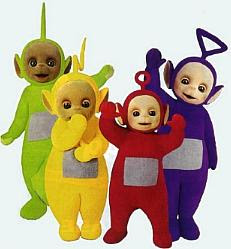 I'm shuddering right now as you're reading this.

The truth is, adults have tormented the fragile psyches of their children throughout history. Anyone who's read a Grimm Brothers' Fairy Tale (a direct translation, not a watered down picture book) or recited that nightly prayer ("If I die before I wake?") knows this to be a fact.

Personally, I like to think it's because we as adults love to freak out the gullible. Because it's funny. And who is more gullible than a child?
I'm going to be a great dad some day.
Posted by Unknown at 9:45 AM

Email ThisBlogThis!Share to TwitterShare to FacebookShare to Pinterest
Labels: Drivel