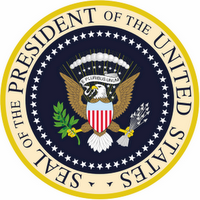 Well, it's been a long and gruelling race. I thought for sure that they had me after the whole nun-orgy scandal came out, or when it was revealed that I was actively selling children to the Chinese for hard cash (Euros). But you have made your choice and, inexplicably, you decided to go with me for this party's nominee for President of the United States in 2040.

Might I just say you all have great taste in candidates.

I wanted to take this opportunity, now that I've won enough popularity points that I can now feign graciousness, to congratulate my opponent on a well-fought campaign.

You have truly offered the American people much through your continued service, and I salute you.

That's why, in the interest of uniting this party behind a ticket of strength and resolve, I have decided to include my opponent on this ticket.

That's right, ladies and gentlemen. I would officially like to invite "Giant Flesh-Eating Bacterium" to be my running mate.

I believe that Giant Flesh-Eating Bacterium has proved the kind of mettle and resolve necessary for making a prime Vice Presidential contender. Whether it be fighting a long primary battle against yours truly, overcoming an unfairly restrictive interpretation of what "human" means to qualify for the race in the first place, or bearing the standard of it's chosen issue (the constant on-going battle against anti-bacterial soap), Giant Flesh-Eating Bacterium has shown the kind of resilience and stick-to-itiveness that proves it will never die. At least, as far as scientists can tell.

Of course, the primary season was a long and hard road for us to travel and, sure, we've had our differences. Who can forget the time when I accused the Giant Flesh-Eating Bacterium of pandering to special interests, or the time it literally tried to eat me during the South Carolina debates? And sure, some names may have been thrown around. Names like "Diabolical," or "Life-threatening," or "Bluberous and Amorphous Sack of Death." Hell, I may have even accused my colleague, in a fit of ill-advised rage, of ignoring my impending numerical victory and continuing the race out of an "unhuman lust for human flesh." Often times in the heat of a charged battle like this past primary season some poor word choices occur and I regret anything that may have offended my colleague or any other flesh-eating bacterium.

So, I want to put the voter's mind at ease. Giant Flesh-Eating Bacterium and I will present a unified front with one goal in mind: the destruction of our common enemy and victory in the White House for 2040.

And you can rest assured that despite it's tendencies to consume human flesh at a ravenous pace and despite the previous destructive animosity between us, I am confident that Giant Flesh-Eating Bacterium and I can work together for a better future. I am also confident that Giant Flesh-Eating Bacterium will probably not try to eat me while I am President. Call it a hunch.