Gird your loins and prepare for my cynical civics lesson for the week:


Well, election day is less than a month away, when the enlightened citizenship of this country will elect their leaders and heads of state for the next 2/4/6 years. Of course, we all know what that means: everyone descends into a month long bout of partisan lunacy.


Democrats blame the nation's problems on Republicans and accuse them of being evil. Republicans blame the nation's problems on Democrats and accuse them of being the pals of terrorists. You need no more than to have watched one of the last three debates to see that is true. My favorite question was at this last town hall debate where a lady asked "How can we trust either of you to run this economy when both parties are responsible for ruining everything (I'm paraphrasing of course)." And all the while, the Third Party Candidates wonder aloud what the hell is wrong with everyone that they don't get tired of this back and forth foolishness between the two and start looking at other options.


Before long, we come to the point where I start shouting at you, with specks of spittle on my beard, about how 'my' candidate is a freaking Saint who we must elect at all cost because electing 'your' candidate would bring about a second dark age where we would all be forced to live in thatched cottages without modern plumbing or iPods.


In short, people lose their minds. And it happens every time as far as I can recall in my short time on this little blue and green orb we call home.


This year it seems to be particularly bad.


On the one hand we have Obama, a reasonably intelligent and eloquent albeit legislatively undistinguished Democratic Senator from Illinois who has shot up the pedestal of notoriety to the point where they are already planning out his mug on Mount Rushmore.


On the other hand, we have John McCain, who went from being this guy: 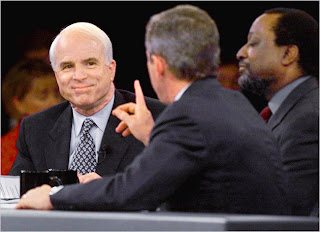 To being this guy: 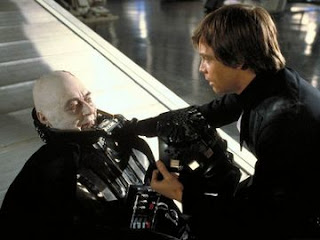 I remember earlier this summer, when John McCain was promising to run a civil and respectful campaign and Barack Obama had just finished off Hillary the Three AM Filth Queen and I thought, "This might actually be tolerable this year." Alas, no.


For while many Obama followers edge closer and closer towards creepy cult-status John McCain, following the realization that he's probably going to lose the election, decides to give up on "issues" and go down swinging like a wounded mountain lion.


Read this account of a recent John McCain rally.


Are you serious? Some of this is border-line torch and pitch fork wielding mob chasing down Frankenstein kind of crazy! This is still America, right? We haven't been transported back to the French Revolution, right? Is Robespierre running this year?


Robespierre joke? Anyone? No? Okay, moving on.


People: chill the fuck out already.


What ever happened to that trusted American virtue known as cynicism? You know, the one where you realize at the back of your mind that if he's a politician, regardless of political party, he's probably bullshitting you to get elected. The one where you realize that the two Parties are really all about getting their weasels elected over the other guy, and that the whole liberal vs. conservative thing is basically just branding. Anyone remember that?


Democrats: it's okay to be excited about your candidate. He seems like a nice guy and, as I said before, reasonably intelligent. Basically, unless he gets caught on camera beating an old lady with a tire iron he's likely going to win. He's not going to save the world, though, and he's not going to wave a magic wand and fix everything within the first 100 days. Two years of already controlling Congress should have convinced you of this by now. In fact, the next four years will probably suck regardless of who ends up in the oval office.


Republicans: face it, your Party is falling apart and, short of catching Obama beating an old lady with a tire iron on camera your guy's going to lose, and no amount of screaming about William Ayers (which, by the way, has to be the most ridiculous political argument anyone's ever tried to legitimately make since the Know Nothing party) is going to change that. What used to be a party devoted to limited government and lower taxes has devolved into a patriotism abusing group of hawks who spend money like there is no tomorrow. If that's still your bag, that's fine; just don't be surprised when a lot of people are 'inconceivably' kind of turned off to that. For the rest of you wondering what the hell happened to your party, it moved to the Libertarian side of town.


Remember, my fellow Americans, this is a government by the people for the people and, as a result, is a reflection of its people. If those people are jackasses, then a jackass government is what you'll get.
Posted by Unknown at 9:35 AM