It's getting around that time in the production process of Are You There God? It's Me, Satan. where I start to think and talk about nothing but the show. So forgive me if that's what this blog becomes over the next couple of weeks. Rest assured, it will eventually go back to what it normally is: two posts a week consisting of monkey knife-fighting pictures.
But for the moment, I wanted to share this: 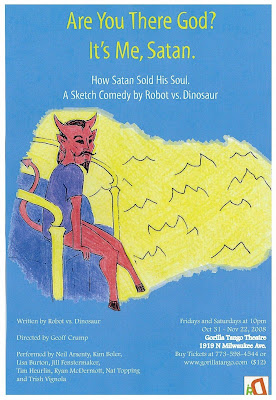 I drew that picture!
Putting up a show is a lot of work, even just a one hour sketch show. If you are only involved in part of the process - just a writer, or an actor, etc. - obviously you work hard on your part and you kind of get an overall sense of how much work the whole production entails, but for me I didn't really understand until I got involved in actual production work, as I have with Robot vs Dinosaur.
For our last show, Greatest Stories, in addition to acting and writing I also worked on the set. This basically meant building a tree out of foam core, wood and tape. It lived in the kitchen area of my studio apartment. That tree became like a child to me.
This time around I've coordinated publicity, drawn the set (you'll find out what that means when you see the show), helped run auditions, helped cast the show, and directed one rehearsal in addition to also acting, singing and writing.
And that's just my part of the deal. The other writers all have their own similarly time consuming production responsibilities.
The great thing about this, though, is that I'm using a ton of skills from past lives that I haven't used in quite a while. I haven't done this much drawing since I went to college intent on becoming an architect. I also haven't directed since college. Prior to RVD, my previous singing experience entailed one song in one high school musical and one or two sketch show songs.
Yet here I am now, a grown up, using all of this shit I never thought I'd use again and it's a blast.
Posted by Unknown at 9:16 AM