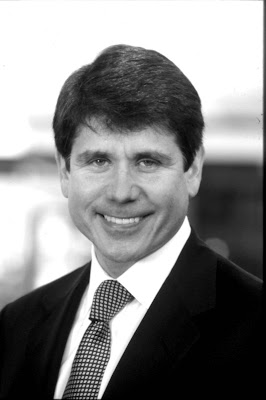 Congratulations, Governor Rod Blagojevich of Illinois. You are officially an asshole.

Governor Blagojevich tried to auction off the senate seat of President Elect Barack Obama, by far the most nationally known appointment ever in the history of appointments, to the highest bidder which, as it turns out, is illegal.

You sir are in fact an idiot.

So that's Kwame Kilpatrick in Detroit and Rod Blagojevich in Illinois. I'm beginning to think I'm a magnet for corruption.
Posted by Unknown at 12:05 PM

I can't believe I didn't tell you! While I was at school, I was part of a major grade-tampering ring for President Bollinger.

Profits make the world go 'round.