No Cussing Club? Are You Fucking Kidding Me?

Last night I could not sleep so I put on The Tonight Show in the hopes that Jay Leno's witty banter with Cuba Gooding Jr. might help lull me into a state of drowsiness. Alas, I was still awake when it came time for Leno to welcome his second guest, the No Swearing Kid.
'No Swearing Kid?' I said curiously, 'What the fuck is that shit all about?'
Turns out there's this teenager from South Pasadena, CA who became so bothered by his friends' use of dirty language - terms like fuck, shit, ass, damn, bitch, cock, bastad, taint, dick-licker, motherfucker, shit-kicking nob-gobbler etc. - that he challenged his friends to stop using any of that offensive language. And then somehow they formed an official club. Which then spawned a website. Which then spawned merchandise. Which begat the hug card: 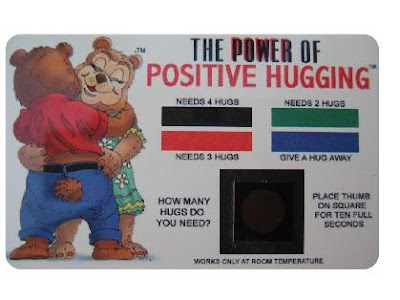 (How disturbing is that shit? I shall not begin to comment on all that is horribly right and woefully wrong about the hug card)
Far be it from me to denounce people, especially kids, from pledging to clean up their language. I respect their God Given Right to some good old fashioned patented American Freedom of Fucking Speech. In fact, they should be applauded.
But a club? We need an organized club that promotes awareness and the use of polite language in public? And furthermore, that club needs to sell orange wristbands, like the money goes towards curing the vulgarity disease, and other shit (and I mean that not as in the generic but rather as in 'chintzy cheaply made garbage') to people?
My biggest concern is that these club members are in danger of becoming chronically lame. This is not like Chess Club where the kids are ridiculed but grow up to be geniuses, or Debate Club where they grow up to be lawyers. Or a Book Club where people learn to fucking read. Even D&D Cubs teach kids to use their imagination and, I don't know, make their own chain mail or something.
These are skills.
But No Cussing Club? What are these people learning other than to be mildly tiffed at but nonetheless respectful of other people? How lame is that?
I mean, fuck.
...
Also, ass.
Posted by Unknown at 10:00 AM

Email ThisBlogThis!Share to TwitterShare to FacebookShare to Pinterest
Labels: The Impending Collapse of Society As We Know It

I need 3 hugs. Only at room temperature, though.

negative hugs are the worst
(and most likely to be prosecuted)