For those of you who are unaware, there is currently a natural gas war in Eastern Europe that is causing severe reductions in available natural gas supplies to at least seven - SEVEN - European countries: Bulgaria, Romania, Turkey, Austria, the Czech Republic, Greece and Germany. The cause of the shortage is Gazprom, Russia's gigantic energy company, shutting down some pipelines running through Ukraine that then supply the aforementioned European nations. The Russian company claims that the Ukrainian company - Naftogaz - owes them $2 billion in payments.


Who gives a damn? Why am I telling you this?


I'll tell you why: posting about Russia allows me to post this: 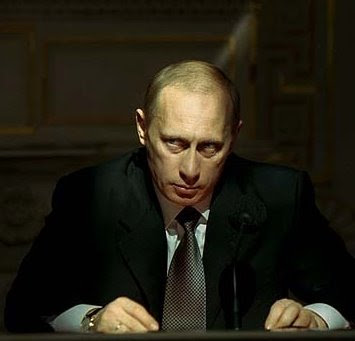 
Question: Who would win in a fight? Vladimir Putin or a Sabre-toothed Tiger?


Question: Who would you rather face in a fight? A Sabre-toothed Tiger or a maimed but rageful Vladimir Putin?


Question: Would you like Vladimir Putin on your side during a bar brawl knowing full well that once his anger takes over it cannot be stopped until everything before him is destroyed?


Look into his eyes: 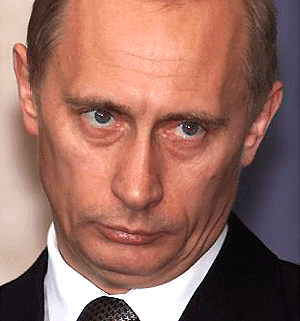 Question: Can you lie to Vladimir Putin?


Question: A passenger train leaves Vladivostok at 2:05 PM heading west towards Moscow (a distance of 3,974 miles) at 55 mph. Five minutes later, Vladimir Putin, wearing nothing but camouflage pants and one boot, begins chasing a rabid bear due east from Moscow. The train runs head on into the bear and Vladimir Putin, disintegrating the bear instantaneously. Of Vladimir Putin and the train, who can expect more structural damage? How many of the train passengers survive?


Question: Can a being so steeped in hatred and death (Vladimir Putin) ever truly know love? Does said being deserve to?


Mr. Putin will expect your answers in the comments section.
Posted by Unknown at 10:06 AM

Whatever he hits, he destroys!

Vladimir Putin is the exact opposite of Enya.