Hey Chicago! Cold enough for you?
Ha ha ha lolz lolz lmao
Seriously, though, we here at the Clever Title staff (namely myself) often poke fun at monkey knife fighting and love to post this picture: 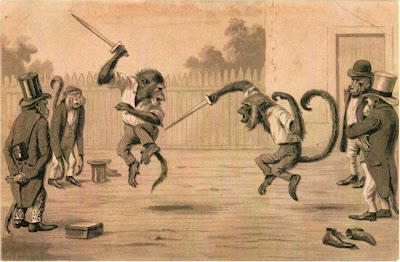 We (I) would like to remind the general viewing audience, though, that it's not really a joke. Primates can and will kill you.
Case in point, the sad story of Travis the monkey. Here is the headline courtesy of the terribly witty Daily Mail: "Drug-crazed Celebrity Chimp is Stabbed and Shot to Death After He Mauled a Woman and Attacked Police Officers."
With a clever title (YEAH!!) like that, why bother linking to the website? Habit, really.
So remember, folks, if you come across a domesticated monkey of some type, do not feed it drugs and do not provoke it.
As a side note, isn't it amazing how quickly something as stupid as a story such as the above becomes a racially charged hullabaloo? I mean, this chimp story came out yesterday and already we have Obama, the New York Post, protesters and Al Sharpton. I'm not going to get drawn into the what's offensive to whom and who has the right to do what argument. I'll just say it's fascinating how quickly a stupid little story becomes a big stupid argument.
Posted by Unknown at 11:50 AM

Yeah, it wasn't a very good cartoon regardless of race. Agreed.

I thought of you.

That takes me back.