Chuck Norris for President... of Texas!

Last July I ran across a beautiful little tib bit of information about how Richard Simmons might consider one day running for Congress. My comic sensabilities rejoiced, which prompted me to run a short lived advice column featuring Richard Simmons' Dalmatians.
And now this: Chuck Norris is considering running for public office.
What public office?
The Presidency.
OF TEXAS!
That's right. In the not so distant future, in the crazy mixed up Chuck Norris alternate universe, Texas secedes from the union and then Chuck Norris rules it with an Iron Fist. Which has to be a movie title of his, right? And if it isn't then it should be.
You remember Chuck Norris. Walker Texas Ranger. He's the one who made chest hair fashionable (briefly) in the world of martial arts. He's the inspiration for a plethora of hyperbolous jokes. Example:
"If you see Chuck Norris, he can see you. If you can't see Chuck Norris you may be only seconds away from death."
More can be found here, here and here.
Maybe he would be a good president. He could not be any worse than the last president from the state of Texas. And I would love to see him square of against Vladimir Putin.
But President of Texas? Didn't they try the seceding from the union thing with some friends? I seem to remember that not working out so much. I mean, yeah. Country has some problems, granted. Especially since we started paying for the Government's record high budget with money trees. But still, Chuck Norris: you know that sounds a little crazy, right?
Then again, we're talking about Chuck Norris here. "Chuck Norris does not sleep. He waits." 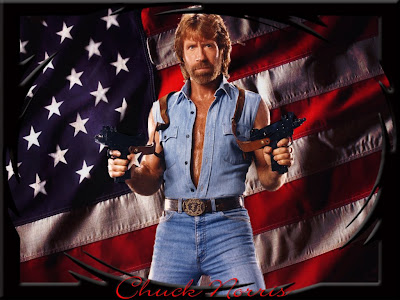 How can you not love that? Now just imagine if Chuck Norris and Richard Simmons teamed up?
Look out Putin.
Posted by Unknown at 11:09 AM