...what with all the show plugging. But let me tell you this: there is nothing worse that working on a show for three months of your life only to have five people show up to the goddamn thing. I may as well bombard you all now and have a clear conscience later knowing I did everything I could.

So, for the last time (this week) here we go:

HEY, Did You Know There's A Sketch Show Tonight? You're goddamn right there is. And it's called "¡Run, palindrome, nuR!" And it's going to be so funny and so hot that it'll blow every one of your sensors assigned to recognize AWESOMENESS.

Where can I find the deets? you ask. To which I reply, "Deets? Seriously, who says 'Deets?' But, in case you can't read the side bar to the left, you can also go here and have your mind blown by some awesome facts.

And, for those of you tired of the incessant show pluggery, some other random drivel for your Friday.

The First Selection of the 2009 NFL Draft Is: Nat Topping. Am I qualified? I can't even run for a minute straight without spewing globs of snot and saliva all over myself but, let's be honest here, it doesn't take much to get hit over and over again every game by another team's gargantuan defensive linemen because your offensive line consists of cardboard cutouts. And for $40 million in GA-RON-TEE'd cash, I think I could put up with that for Five Years.

But, if a completely out-of-shape 27 year old dude with no prior football experience isn't going to cut it, I'm sure Matthew Stafford would take the money. Just be sure health insurance is included in the contract, Matt.

Sports is Boring! What Else? Hmmm. Well, we can always talk about the weather. Today in Chicago? 80 degrees and sunny. It's almost enough to make up for those last five or so months of "Oh God, Why Did I Move to Chicago and Not (Insert Location With Reasonable Weather)?!" that is so familiar to everyone who lives here.

And Finally... because I haven't posted a monkey picture in a while, here is one of a monkey sleeping. 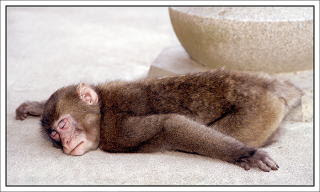 Oh monkey. If you only knew how jealous I am right now.

I wonder, what do monkeys dream?
Posted by Unknown at 10:28 AM