The Most Unfortunately Named Protest Ever

Wrote a couple of checks to the government and sent them off with a kiss this week and to tell the truth I miss the money already. It's enough to put you in a foul mood this lovely Wednesday, April the 15th. Which happens to be tax day.
Of course, I was surprised to hop on the interwebs today only to find that there are people around the country protesting that very same cause for my own foul mood. They are apparently doing so by mailing teabags to the government as a modern homage to the Boston Tea Party.
They're calling it a Teabag protest.
Intrigued, I immediately went to the Google machine and typed in 'Teabagging' to get more information. What I found was not at all what I was looking for, and brought back horrible memories of all male Catholic high school.
Protesting taxes is a God-given American Right. Hell, the whole point of the American Revolution was to get out of paying taxes. You think it was about representative democracy or liberty or some other trumped up philosophical something or other? No, my friends. Money. Pure and simple. 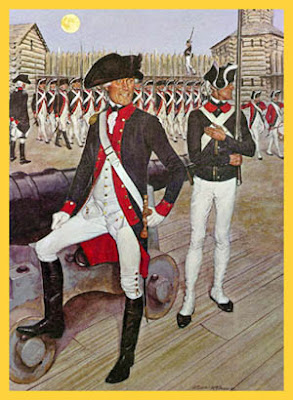 Shown above, a Revolutionary War officer prepares to teabag an unsuspecting cannon.
Of course, once the "shackles of tyranny" were thrown off and people realized that they would like roads and stuff, taxes came back. And we've been walking the balance ever since.
Then again, I think if you had told Washington that one day we would be borrowing money from China to pay for bailing out banks on a bunch of bad loans made to buy $250,000 dollar homes, he would have laughed in your face. Mostly because the prospect of traveling 20,000 miles around South America and over the vast Pacific Ocean to borrow money from the Imperial Quin Dynasty would have been laughably impractical.
Also, with $250,000 you could have bought many many Manhattan Islands at a time when people made their own houses out of wood that they themselves had cut.
So I understand the desire to protest. I just wish they could have picked a better name.
Posted by Unknown at 10:53 AM

Sweet Jesus. The caption of that picture made me spit water on my keyboard!

I've been away from my computer machine and just read this post. And yes, greatest caption ever.