I always thought Pirates were jaunty lads in old-timey yet outlandishly colorful garb who talked funny and worked at seafood restaurants. Apparently, there's a dark side as well. One where they actually hijack real boats, take real hostaged and even hold real people ransom.
It's not supposed to be this way. Pirates are supposed to be fun, charismatic, flamboyant, and a little bit goofy. You know, like these ones: 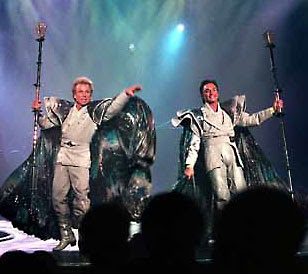 We can't have people running around ruining Pirate jokes for everyone! What will happen to International Talk Like a Pirate Day? What, people are going to have to learn Somali now?
Man, Johnny Depp must be spinning in his grave.
He's not dead?
Well, err...
Man, add one more thing to the list of reasons not to go to Somalia. I think there's still room at the bottom of page five.
Posted by Unknown at 11:01 AM

check out Roy's cod piece! He could keep his keys and wallet in there...