Friday: Back In Action

Hello my Faithful Readership of Five,


It's good to be back. I was in Michigan (and then briefly back in Illinois only to fly back to Michigan) most of the week tending to personal matters, so apologies if you noticed a lack of postage around these parts.

Hey, How 'Bout Some Reviews? These are for Measure for Measure, the Shakespeare show I'm doing with Promethean Theatre Ensemble. Here is a link to a site with links to several reviews.


The reviews kind of run the gamut from "Highly Recommended" to "Somewhat Recommended" to "Avoid Like The Swine Flu." Yes, there is one that makes a tasteful Swine Flu reference, from a reviewer who is heralded as "intelligent, witty and provocative" by the site that published the review. Man, Swine Flu jokes are, like, so three and a half weeks ago.


So, I don't know. Take them for what you will. The tally is two Highs, one recommended, one somewhat recommended and one not-so-much, proving once again that Theatre Criticism is not a science. Nor an art, really. But, I would say the general response from people has been positive and my girlfriend's mom saw it and didn't publicly decry the show, so that's always a good sign.


No ink was spilled on me specifically however here's a little something for you Nat-ophiles out there, wearing quite possibly the greatest pair of pants I've ever worn. 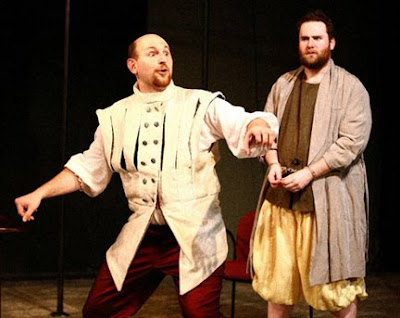 If you only knew the pride welling up inside me. Unfortunately, those pants did not make the final performance so enjoy the photo while it lasts.

Hey, Speaking of This Show, How About a PLUG!!


Go see the damned thing. Info in the sidebar.

But Wait: How About a SECOND PLUG!!


This one is for Robot vs. Dinosaur's revue: Run, palindrome ,nur, with one FINAL PERFORMANCE TONIGHT at Donny's Skybox. This is your last chance to see it in all of it's 18 person'd cast glory, so get your asses out there. More info can be found in the sidebar.

Hey, have a happy holiday this weekend!
Posted by Unknown at 10:58 AM

Wow, those pants! I guess it takes a lot of material to hide those two shiny cocks of yours.

I'm going to have the other stooge cropped out and put this picture up somewhere. I really enjoy the "acting" on your face, too. And by acting I mean "nicely trimmed beard."

I know, get my own blog.

Are you wearing contact lenses, are are you squinting because you can see? You look confounded...

That would be what I pass off as "acting."