Matt Millen Compacts With The Devil

I don't know how else to explain the fact that this dude keeps getting work. For those of you who are unfamiliar with the plight of those sports fans residing in or sympathetic towards the Mitten State, Matt Millen is a character much reviled for ruining a certain organization that shall remain nameless for fear of accidentally invoking the dread Sports Curse of Clever Title fame. 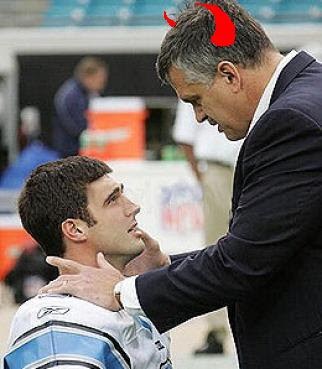 Matt Millen sucks the soul from a young rookie to fullfill his Satanic obligations, shown above. Also, P.S. who needs expensive photoshop when I have Paint for free? SNAP!

After an eight year reign of terror so devestating that it culminated in the worst record ever in the history of the NFL, many of us thought that we would just slink off to a farm in Pennsylvania, where he would hide himself under a fieldstone, never to be seen or heard from again.


Apparently ESPN has other plans for the sports loving world. They are not content with Brett Favre and Manny Ramirez - this week they are going for the Trifecta of Ridiculousness.


This may come as an initial shock. However it does make sense when you consider that both ESPN and Matt Millen share the same agent.


And that agent is the Devil.


For me, the worst part is that he will be commenting on College Football games. Not only is he infesting every facet of football, but ESPN is exposing young and innocent college kids to the vile, corrupting influence of Matt Millen. Won't someone please think of the children?!


Well great. So everyone who loves and enjoyes the watching of football can now be subjected to the dashing moustache, fork'ed tongue and vaunted football expertise of a man responsible for running a certain unnamed franchise into the bedrock. I hope we can all take him seriously as he impresses us with his knowledge.
Posted by Unknown at 11:22 AM

In a perfect world guys like Matt Millen and (former Piston) Isaiah Thomas would be forced to drop down to the lowest level of thier sport and then coach/manage their way back to the top.

Millen would have to achieve winning records in Pop Warner, Powder Puff, High School, Co-ed Fraternity, College, Arena and Canadian Leagues before he would be allowed to hold a high level NFL job ever again.

We should try to get this passed as a law in Michigan.

I think in Michigan a law like that would probably pass.