Man, it's my first Friday in months where I haven't had a show to plug. What am I going to do? I don't know, maybe...

I know, I know. I talk about weather like I was an old man. But have you Chicagoans looked outside lately? Two Severe Thunderstorm Warnings, a Flash Flood Warning. I think if we get the Tornado Warning too then we get some sort of prize.

And me without an umbrella. Awesome. What could be worse? I don't know, maybe...

POSING LIKE HITLER AT A RALLY MEANT TO DEFEND HILARIOUSLY FABRICATED ELECTION RESULTS? 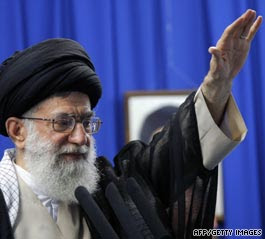 Yikes! Way to win the people's hearts, buddy. Before you start threatening people for peacefully protesting, how about an explanation first as to how you counted 40 million ballots in two hours? Maybe then you can get away with the incredulous, "Eleven million votes difference? Sometimes there's a margin of 100,000, 200,000, or 1 million maximum. Then one can doubt maybe there has been some rigging or manipulation or irregularities."

Which translates to "This election looks so cartoonishly rigged that it couldn't possibly be really rigged, right?"

Maybe if you weren't Iran, buddy.

Great, now I'm really in a bad mood. What could possible pull me out of this funk? I don't know, how about...

You read that right. Watch the below, my friends. I promise you will not be disappointed.

I don't speak Spanish, but even I know that's hilarious. There's a part of me that wants to be just like this shark. Is that weird?