Look At These Freaks... I Mean, Uh, Poor Girl

This link comes courtesy of my buddy Casey.

It’s a story about a young Belgian lass who fell asleep in the chair of a tattoo artist only to awake with fifty-six (as in fifty, plus six) starts tattooed into her face. Here’s a picture of the poor innocent dove featuring a very classy rhinestone encrusted “SEXY” belt buckle: 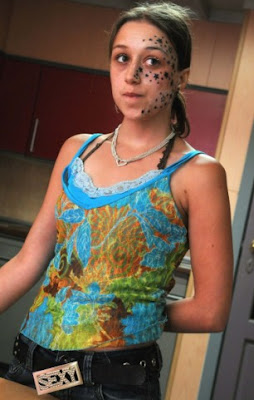 The poor lady asked for only three stars and then promptly decided that it was time for a nap. However, she seems to think that the tattoo artist may have “misunderstood her French and English” and thought that she asked for fifty-six. Do three and fifty-six sound similar in French? I don’t speak it, although the differences in English seem to be pretty distinct.

But whatever; be that as it may fifty-six stars she now has plastered across the left side of her face. And, according to her upset father and upset boyfriend, she is apparently also upset enough to sue. Despite having witnesses on hand at the time of the tattooing claim that she in fact specified that she wanted fifty-six stars. And despite the fact that fifty-six stars would be an obscenely random ‘mistake’ for someone to make. And despite the fact that the tattoo artist is a respectable gentleman, as evidenced by this picture. 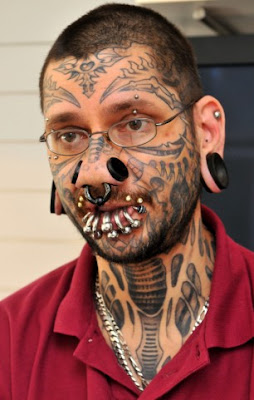 I think the glasses really pull that look together.

It would be easy to sit back and assume that this young lady is lying, that the evidence against her is too great and also by the way HOW DO YOU SLEEP THROUGH THE PAIN OF SOMEONE TATTOOING 56 STARS ONTO YOUR FREAKING FACE? it would be easy to rush to that kind of judgment. But we here at Clever Title (we being me) believe in giving people the benefit of the doubt.

This particular instance hits close to home, as I managed to sleep through the pain of having my hand underneath a radiator only to wake up and find a gigantic eighth degree burn on my freaking hand (with the scar as evidence). Of course, I may or may not have enjoyed an excessive amount of fermented beverage that evening, but this is not the point.

The point is… where was I going with this? Oh yes. Don’t trust the Belgians.
Posted by Unknown at 11:21 AM

Holy Cow, what a scary, scary dude. What was she on? She was either drunk or high to stay near that guy to start with!