Seriously, this has gone too far.
Favre, you've retired like eighteen times already. You gave up your right to Green Bay legend status to play for the New York Jets, which didn't work out. You're returning to a certain division that greatly affects my fanship season outlook. You're like the zombie of the football world. And you've become all anyone talks about in the sports media.
In short, Brett Favre, you've become a nuisance.
Those who follow this blog knows that those teams and players mentioned on this blog are plagued by the evil Clever Title Sports Curse - the phenomenon whereby those poor saps mentioned on this here blog are hounded by mediocrity and disappointment throughout their season. I try to be very careful who I mention here so that good teams are not inadvertently harmed while the bad teams are rightously punished for their inherent wickedness.
Well, the time has come for yours truly to once again use his blog for evil.
I hereby officially pronounce Sports Curse on you, Brett Favre, and on the Minnesota Vikings for selling their football souls for a chance at a Super Bowl this year. 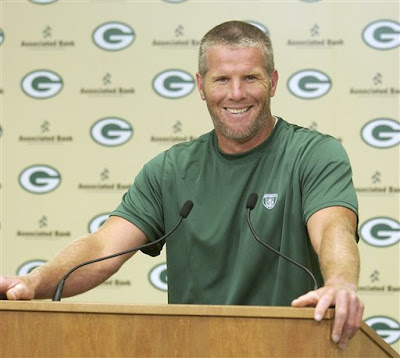 Woe unto you, Brett Favre! And woe unto Minnesota!
Posted by Unknown at 10:48 AM

Take it back, Evil Man!

As long as there are HD Wide Screen televisions, his booty is more than welcome to be on any active roster. In fact, the NFL needs a few more Brett Favres and few less Marshawn Lynch's-- hello Geico Caveman???

Natalia: I think you are in love with the ass and not the man. If I put together a high definition blueray highlight reel of his ass and just hit play for you on Sundays, would that suffice?