Friday, and Not a Day Too Soon

What do we do on Fridays again?


Plug Shows? Yes, we do. 20% Theatre Company's Snapshots. Deets on the side bar. What else?


Talk About Interesting Things on the Internet? We can do that too. The Interwebs are spendid things, mostly because it allows us to connect with people doing stupid or inappropriate things. Take for instance Texts From Last Night, which is an enjoyable website brought to my attention by my friend, Natalia. Basically, it's a list of ridiculous texts. There was a "bees in my fucking pants" text that was classic. As Natalia points out, they're even funnier when you consider that someone takes the time to type these out. Thank you Natalia and thank you Interwebs!


Special Newsworthy Notes? Oh! John Hughes passed away. I look a look at his IMDB page and was amazed at the amount of movies he's touched, from classics like Ferris Bueller to the epic Vacation, Christmas Vacation and Planes, Trains & Automobiles to movies like Home Alone.


I knew the guy was a big deal, but damn. That's some heavily influential comedy right there. And he was apparently born in Lansing, Michigan.


What am I missing, Mr. Bold Font?


Stupid Pictures? Well, I don't know stupid, but what about BADASS pictures of a Russian political strong-man performing various feats of macho awesomeness? Video included, though I can't listen to the sound so I don't know what is said. I can only imagine something Russian and badass. Click on the Photo Gallery to see such gems as this... 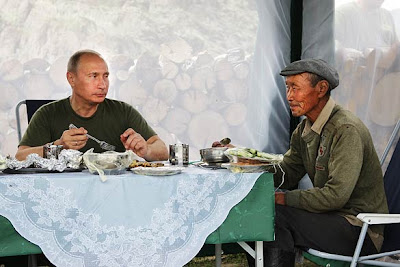 ...where aparently a local man said something displeasing during a meal. Poor, poor bastard.


Now are we good? All Friday'd out?