Friday Fears for the Gallbladder's Safety

KFC Declares War on Your Gastrointestinal Tract. And their secret weapon? This monstrous beast of a "sandwich" called the 'Double Down.'


I know the idea of shoving something so eloquently named down your throat is almost too appealing to pass up, but hold on for just a moment while we explore the contents of aforementioned "sandwich"

The KFC Double Down sandwich is going to consist of two slices of bacon, a slice
of pepper jack cheese, a slice of Swiss cheese, and some of the Colonel's secret
sauce. Serving as the bun on both ends of the sandwich will be two filets of KFC
original recipe chicken.*

Yes, my friends. Fried chicken in place of bread. Now you understand why I've been putting "sandwich" in quotation marks, yes? 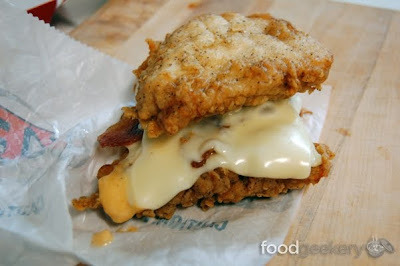 Image courtesy of foodgeekery.com, who was brave (fool hearty) enough to try it.


The sandwich is on sale at test stores in Nebraska and Rhode Island - yes, you now have a reason to visit Rhode Island - and is supposedly delicious. Which, of course, is no surprise given that it consists of fat dredged in fat and slapped in between deep fat fried fat fatty fat.


I'm no culinary elitist - yes, I've been known to cuddle up next to a box of microwavable White Castle cheeseburgers from time to time - but even I have to draw the line somewhere.


*This quote came from Associated Content. I went back to the article to link and found that the "content was unavailable." The Colonel must have eyes and ears everywhere.


Our Sketch Show - we're holding auditions next week. For you actor types, come check us out. For you non-actor types, the show is coming up in a couple of months. Come see it. Now go enjoy your Friday.
Posted by Unknown at 12:40 PM

where is pain from gallbladder felt, stores bile for the liver, but Learn how to prevent and relieve pain using natural home remedies for gallbladder problems.