Know Your Days of the Week: Thor’s Day

A lot of times, we take certain things for granted. Monday is Monday and Thursday is Thursday, and we don’t really know what Thursday means other than it is the fourth day of the work week. Mostly because nobody cares; it’s not important to know why Thursday is called Thursday; it has nothing to do with how we live our lives; why would you ever want to waste your time learning something so useless?

I’ll tell you why: because today is Thursday and I’m lacking inspiration for proper blog postage so this is what you’re stuck with. So humor me. Or go find another blog.

The History of the Seven Day Week:

A long, long time ago, days just happened one after the other. There was no thought as to whether or not those days should be grouped together and separated from other groups of days and, as a result, calendars were just really really long strips that went on and on forever with one day to the right of the one preceding and because of this calendars were impossible to read. So one day, people got together and said “Enough, this is bullshit. How are we going to know how many more days it is until the next orgy if we can’t just look at a single page and know where we are?”

So, it was decided that from then on days would be grouped together into “Weaks,” which was reflective of how ‘weak’ the situation was at the time. They decided they would just start numbering them, and that a week would be however many little boxes could fit on a page at a time: which coincidentally is seven.

Gradually, people started adding names to the seven different “days of the weak” to differentiate from the numbering. After all, having four “7ths of June” isn’t going to help anyone, is it? 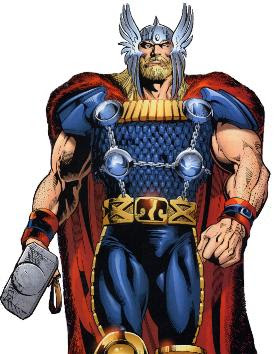 Not even remotely homo-erotic. Nope.
The name for Thursday comes to us from our Viking brethren. Other Viking contributions to Western Culture: herring and the thirst for blood and money.

One story tells of the time when Thor was tricked by a frost giant named Geirrod into coming over to his castle, presumably to kill Thor. When Thor got there, he was so pissed off that he killed not only Geirrod and his daughters, but also every frost giant he could find within the immediate vicinity.

How would you like to just be an innocent bystander frost giant, trying to go about your daily life, when suddenly out of nowhere comes this gigantic red headed psychopath throwing hammers and lightning around?

In honor of Thor, the bad ass God of killing innocent frost giants with lightning, we spend our Thursdays listlessly sitting around at work, praying that the clock moves faster so that we can get to Friday, which is a much more pleasant day. We then go home and watch network television – the Office is on Thursday nights. That Steve Carell cracks me up!

Thursday is also Thanksgiving, which is a day of great family strife across this great nation of ours. Imagine having a family full of Thors.

October 24, 1929: Black Thursday, which is the day the stock market crashed and the national economy began the long spiral downward known as the Great Depression.
How’s that for cheery?
Posted by Unknown at 12:06 PM