Know Your Days of the Week: Woden's Day

A lot of times, we take certain things for granted. Monday is Monday and Wednesday is Wednesday, and we don’t really know what Wednesday means other than it is the third day of the work week. Mostly because nobody cares; it’s not important to know why Wednesday is called Wednesday; it has nothing to do with how we live our lives; why would you ever want to waste your time learning something so useless?
I’ll tell you why: because today is Wednesday and I’m lacking inspiration for proper blog postage so this is what you’re stuck with. So humor me. Or go find another blog.

The name for Wednesday comes to us from our Anglo-Saxon ancestors. The Anglo-Saxons are best known as the precursors to the modern English – back before the superiority complex when they were just pasty. In fact, the Anglo-Saxons are one of the few cultures to ever be conquered by the French.
The Anglo-Saxons named their third day of the week after their god Woden. He was their religion’s psychopomp which, though it sounds like a hairstyle out of the 80’s, means that supposedly he greeted the dead when they arrived in the afterlife. In addition to this most depressing of jobs, Woden was apparently also the precursor to our modern day Santa. That only makes sense, right? I mean, with a mug like this I can kind of see why: 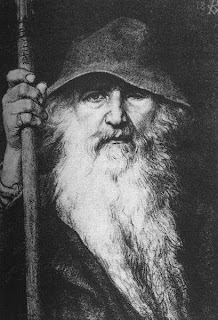 We can all be thankful that his catch phrase changed to the Santa-rific “What do you want for Christmas?” from the more Wodenly “Touch this pole and make a wish.”

Incidentally, the Romance Language countries (France, Italy, Spain, etc.) also named their third day of the week after the Latin psychopomp, Mercury. Mercury has much better shoes, though, so I guess score one more for France.
Wednesdays Today:
In honor of Woden the Anglo-Saxon psychopomp, we spend our Wednesdays looking forward to one day passing on from the tediousness of our work week to the joyous heaven of the weekend.
A common nickname for Wednesday is hump day, supposedly because by the end of Wednesday the work week has passed over the half-way mark, and looking downhill towards the weekend. Why it’s called “hump” day and not “hill” or “summit” day, I can only guess.
Wednesday - Your Lucky Day:
At least today it is: September 9th, 2009, or 9-9-09 if you conveniently drop the ‘2000’ from the year. The number 9 is considered lucky by the Chinese. So, go buy a lotto ticket. I’m sure that absolutely nobody else is thinking the exact same thing.
Posted by Unknown at 9:13 AM

I thought "Touch this pole and make a wish" was a Santa phrase? That's what he always told me, anyway . . .