Know Your Days of the Week: Moon’s Day

A lot of times, we take certain things for granted. Monday is Monday and we don’t really know what that means other than it is the first day of the work week. Mostly because nobody cares; it’s not important to know why Monday is called Monday; it has nothing to do with how we live our lives; why would you ever want to waste your time learning something so useless?
I’ll tell you why: because today is Monday and I’m lacking inspiration for proper blog postage so this is what you’re stuck with. So humor me. Or go find another blog.
Previous Days of the Week:
Tiw’s Day
Woden’s Day
Thor’s Day
Monday: The Day of the Moon 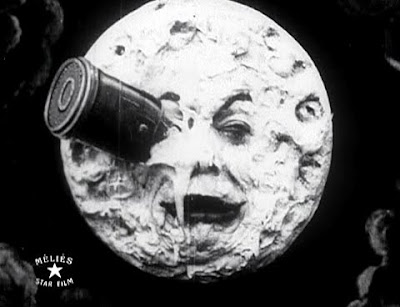 After doing a couple of these ‘Know Your Days” posts, I have to say it’s kind of interesting that all these different languages tend to share the same meaning for the same day. Monday is an English language contraction of “Moon day” which in Latin based countries is “lunae dies.” French for Monday? Lundi. Spanish? Lunes. Italian? Lunedi. In Hindi it’s Som-vaar, which means “day of Soma.” What does Soma mean? Moon. Even in Japan, where absolutely nothing makes sense (have you seen this Domo thing at 7-Eleven?), even there getsuyobi means “day of the moon.”

Okay, okay. The first day of the work week is named after a gigantic rock hovering over head. So what?

I’ll tell you what: do you know where the word lunatic comes from? Why, Lunae of course which, as we already know, is Latin word for Moon. What causes Werewolves to go all crazy and start killing people? The moon. What causes the tides? The moon. And gigantic catastrophic tidal waves? Also the moon.

What is it called when you drop trow and display your back side to others as a sign of your displeasure? Mooning.

There’s a reason today is named after the gigantic barren gray rock visible to us in the middle of the night, reminding us of the cold, inhospitality of the universe that envelops our beautiful little blue planet like a big suffocating blanket of emptiness.

It’s because cultures around the world realize that Monday sucks. There is no getting around this indisputable truth.
Black Mondays:
Would you believe that, like Thursday and Tuesday, there’s also a Black Monday? Would you also believe that there have been many Black Mondays throughout history? A selection of Black Monday’s for your enjoyment courtesy of that font of knowledge Wikipedia:
Again, more proof of what we already know.
Tangential Excuse to Post a Cartoon Strip:
Garfield is a popular comic strip. Garfield hates Mondays. There’s a website called Garfield Minus Garfield that removes Garfield from Garfield comic strips as a means of revealing “The existential angst of a certain young Mr. Jon Arbuckle.” The resulting angst is reminiscent of that which I feel on Mondays, which is the day that Garfield hates. Therefore, enjoy:

Email ThisBlogThis!Share to TwitterShare to FacebookShare to Pinterest
Labels: Black Monday, Garfield Minus Garfield, Know Your Day, The Moon