Double posted to the robo-blog here.
This last weekend was the 50th anniversary celebration for the Second City. The theatre company held all sorts of special reunion shows, round table discussions, lectures, get-togethers, love-ins and other assorted events. In my typical Nat Topping obliviousness - I can barely remember my own birthday much less some theatre company's fiftieth - I nearly missed out on everything.
Luckily, my girlfriend (who is admittedly smarter than me) managed to get tickets to the mainstage show last night. While not strictly a special 50th anniversary function, there were alumni present so we had a combination sketch show and celebrity whale watching expedition.
Before the show started, this guy wandered by our section of the theatre: 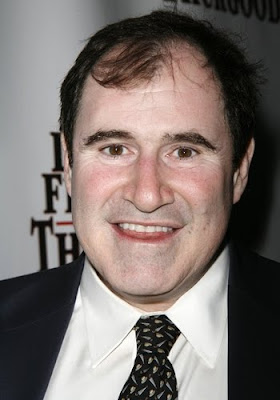 I know I'd seen this guy before in a bunch of stuff. I couldn't place where. Neither could my girlfriend. The guy from Arkansas sitting at our table also couldn't place him, and neither could his disinterested girlfriend from Colorado.
Even the four students who snuck in at intermission and took the seats behind us couldn't think of the guys name. We all knew he was famous; we just didn't know why or who he was.
And nobody had enough bars on their e-phones to hop on the interwebs and figure it out!
When the show was over, alumni were invited to take part in the improv set (which was very cool) and it was only then, when he was introduced, that we found out the guys name. As you've probably gathered from the title of today's post, it was Richard Kind. You likely recognize him too; he's had a long and prolific career as a character actor and has been in a ton of stuff that you know of have seen.
I don't really have a point here other than it's a strange phenomenon: quasi-fame. I would also like it noted that he was probably the best improviser on the stage for that set.
Posted by Unknown at 8:38 AM

Weeeird, you know, he totally looks familiar, like I know I've seen him in a ton of stuff before... but I just looked at that list, and I'm pretty sure I haven't seen anything other than Producers.