The first Sketchfest show went really well last night, for those of you who were concerned. I did not fall on my ass while disco dancing. Which may have actually disappointed some people. The evening also yielded my first "group I knew nothing about who was awesome" in Klepper & Grey.
The moral: see Sketchfest, you lazy bastards!
And now, on to the Friday nonsense links.
CNN Wants You to Get Bizzay: It's funny, these little patterns that pop up from time to time over the Interwebs. Take, for example, this delightful little article from CNN extolling the virtues of constant sexual intercourse. The article claims that "people who have frequent sex tend to live longer and have healthier hearts and lower rates of certain cancers. These studies also show that men with an active sex life have healthier sperm, and sexually active women have fewer menopause symptoms."
The study's findings caused this gentleman to express his happiness in the way he knows best. 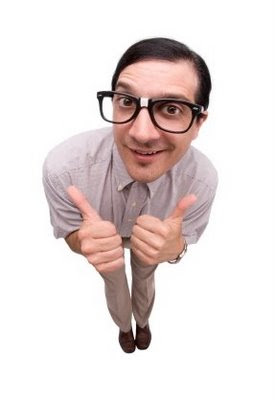 "I'm a nerd, and I approve."
You hear that ladies? The big nasty is going to kick all those menopause symptoms right out the door for you. The only problem? Your G-spot might not exist.
At least, according to this article entitled 'Finding the G-spot: Is it real?' posted on that very same venerable online news source, the CNN!
This, of course, would confirm a long held doubt of mine. And by doubts, I mean an invention of the mind meant to ease feelings of inadequacy caused by a certain deficiency that I need not name here thank YOU very MUCH.
So to review, CNN suggests that you have more sex. Even if it's not very good.
Speaking of Nerd Approval: have you ever wondered what The Big Lebowski would sound like if written by Shakespeare? No? Well, read this anyway.
And Speaking of CNN: Here is an interesting little opinion piece on the Underwear Bomber and the fact that everyone is freaking out.
I like this little bit: "We're doing these things even though airplane terrorism is incredibly rare, the risk is no greater today than it was in previous decades, the taxi to the airport is still more dangerous than the flight, and ten times as many Americans are killed by lightning as by terrorists."
The idea is that people can comprehend everyday tragedies like car crashes (nobody would outlaw the Prius just because one was in a car crash, afterall), but that the extremely rare and unusual threats are the ones that grab our attention and, as a result of our emotional fear response, we go out of our way to demand "action" so that we can at least feel safer.
Lost in the whole national discussion here is that the bomb didn't work. He was an inept bomber. His pants lit on fire. If it weren't for this widespread reaction of panic, this would be a premise for comedy. But instead, people freak out and then Al-Qaeda gets all of the "They're Back!" press for what amounted to a failure.
This is the exact thing I requested we all not do this decade. Don't let me down, people!
And Finally: if you've ever wanted to see a grown man sing a duet with a monkey puppet, here is the link for you. That's my buddy Mike from High School. He lives out in LA now and is working on a short film called "My Friend Peter."
Happy Friday!
Posted by Unknown at 8:42 AM

Email ThisBlogThis!Share to TwitterShare to FacebookShare to Pinterest
Labels: CNN, My Friend Peter, Sexual Intercourse, the Female Orgasm is a myth, The Impending Collapse of Society As We Know It, This Nerd Gives You A Thumbs Up