Ah Friday: an excuse to post a bunch of links and make snarky comments. Let's see what we have today. 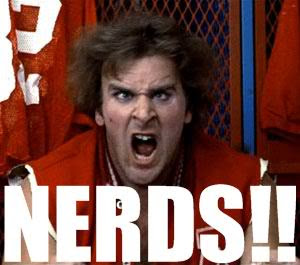 Nerds Name Children Nerdy Names, Perpetuate Vicious Cycle of Teasing: I mean, come on. At least give your children a fighting chance. Apparently Avatar is so life-alteringly spectacular (I saw it; it was good but Jesus people let’s not lose out minds) that people are naming their children after fictional characters from the movie. Names like Neytiri and Toruk, and even Pandora – which in addition to being the name of the planet is also the Ancient Greek mythological figure whose curiosity unleashed all of the evils of mankind. What a namesake!

Can I ask a question? What’s wrong with names like Philip or Jane or Timothy?

You know what would cheer you up?

Friend, fellow RvD member and long time poster (Enya’s Assassin, etc.) Chris Othic has finally taken my advice and started his own blog. With the express purpose of ripping off and belittling Joe Janes’ 365 Sketches Project. It’s called “A Dick Joke a Day for a Week.” The site is puerile and childish AND I LOVE IT. Today’s joke is a physicist’s dick joke, and includes a couple of bonus jokes in his commentary section.

Hey, Speaking of Dick Jokes: here’s a video of a grown woman newscaster trying “to grab David Beckham between the legs” during an interview. For those of you confused with what “between the legs” means in this instance, it would be touching his penis. This would be mindboggling except that this was for a spot on Italian television, which is a topsy-turvey parallel universe where the inappropriately nonsensical is the only thing that makes sense.

Bit that I found fascinating: Beckham is “on loan” to an Italian soccer team which, “on loan?” What the hell kind of sport is this soccer anyway where you can just loan out players?

Meanwhile, in the World of American Television: Conan O’Brien’s shafting will be complete tonight when his last Tonight Show airs, and part of his coping mechanism has been putting up nonsensical comedy bits on the remaining shows to deliberately cost NBC money. Here’s an example. I’ve caught a couple of his shows this week. It’s actually been pretty good late night entertainment. I wish that Conan had this same destructive edgy attitude the whole time. Don’t know if that would have helped the ratings or not, but I like my comedy with a little bit of an angry edge to it.

And Finally, It’s Time to Nerd Out: I’m sure the vast majority of people will find this boring, but for some reason or another I thought this clip was fascinating.


It's just kind of amazing what people can do.

Hey, at least I’m not naming my kid Stonehenge, right?
Posted by Unknown at 9:33 AM

Email ThisBlogThis!Share to TwitterShare to FacebookShare to Pinterest
Labels: Avatar is the greatest anything ever made in the history of ever, Conan O'Brien, David Beckham, Dick Joke a Day, Italians and Their General Disregard for Propriety, Nerdery

Nat, thanks for giving the shout out to my blog. Dick Jokes have never gotten the respect they deserve. It might be hard (like my dick) but I think I can make it to seven (not like my dick).

After watching the video on the guy who moves heavy objects without any tools, I have to point out that I have been using these techniques for years on (you guessed it) my dick.