Proof of the Curse: USC

Warning: here follows a post about sports. I apologize for those who are not football inclined. Come back tomorrow. I’ll probably have something less sporty.

Proof! Proof that the Clever Title Sports Curse is real!

I had my doubts, gentle readers, after attempting to curse the Minnesota Twins. They went on to beat a team that I love very much and thus prevented this team from reaching the playoffs. I became disillusioned. I was convinced that the Sports Curse did not exist and that, in reality, Sports just hated me.

But now I have proof: proof that the Sports Curse is not only real but nefarious!

I submit for your consideration the lamentable case of the University of Southern California.
On a warm August day in 2008, I brought down the thunder upon the USC Trojans. I then completely forgot about it. The Trojans did, after all, go 12-1 that season. I figured that USC was more evil than even the Sports Curse and, as such, could not be destroyed.

In 2009, the Trojans went 9-4. Then, less than a week ago, USC head coach and sun baked pretty boy Pete Carroll bolts for the NFL to coach the Seahawks. THE SEAHAWKS, people. There are whispers of Coach Carroll timing his departure such that he abandons the school just before NCAA investigations get rolling for various violations involving cars and houses. 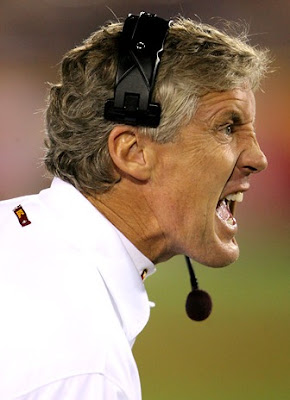 Go Seahawks! Go before the NCAA catches up to us!

This would be bad enough on its own, but that would leave out the part where USC hires Lane Kiffin to be Carroll’s replacement.

Here’s a picture of Lane Kiffin: 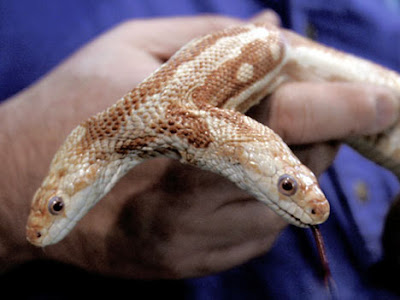 Wait, that’s a picture of a two headed snake! My mistake. Oh well.

You may remember Lane Kiffin from such achievements as being a horrendous head coach for the Oakland Raiders, or a mediocre head coach at a university that shall remain nameless because, let’s face it, they have enough problems as it is without piling the Sports Curse on top. You may also remember Kiffin from various NCAA violations of his own, or for mouthing off at other coaches. Or his hot wife.

12-21: Lane Kiffin’s record as a head coach. The second number would be the amount of losses. This is widely considered by the Sports cognoscenti to be a horrible hire.

Score one for the Sports Curse!

How far does this curse go? Did you by chance mention Conan O'Brien and/or NBC at one point? Did you blog about Haiti in the last year? Please don't forget to blog about the 2010 Yankees and maybe do a post or two about Sarah Palin, and also my arch-nemesis, Greg Wendling. Also Think Tank.

I think it just ruins sporting, although I'm sure Sarah Palin, Think Tank and Greg Wendling will ruin their own careers on their own.

As far as the Yankees are concerned, I did write a poem for them. Hopefully that's enough to destroy them for the near future. My poetry has that effect on ladies; why not baseball too?