The destruction of high culture is upon us, and it's more glorious than I ever could have imagined! You've seen LOLCats; you've seen FailBlog; now feast your eyes on Babies with Laser Eyes! 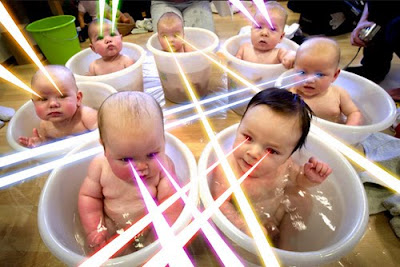 Is that adorably dangerous or what?


Chef Beppe Bigazzi shares his recipe for Cat Stew, much to the shock and horror of his cat loving co-host. Take a look at the video and tell me that you've never made that face.


That is the face of being stuck in an awkward situation.


Italians already don't give a damn what they say, you think an elderly Italian is going censor himself? He even acknowledges the station is about to get some angry calls from "nature lovers." L'Uomo just don't give a damn.


Speaking of Horrifically Bad Food Choices: try the McGangbang next time you're at McDonald's. It's a McChicken sandwich (the whole sandwich, including the bun) tucked neatly between the patties of a double cheeseburger. I'd try it myself, except that I gave up "attempting to kill myself with grease" for Lent.


This May Be Fascinating to Only Me: but there is a group of people out there who still believe - in all seriousness - that the Earth is flat. No, I am not joking. They have a website, the Flat Earth Society, which includes a chat forum where you can debate with them about whether or not the Earth is actually flat. They can prove it! With Science!
Posted by Unknown at 9:43 AM

Email ThisBlogThis!Share to TwitterShare to FacebookShare to Pinterest
Labels: E Phemera, Italians and Their General Disregard for Propriety, LOLCats, This Sanwich Will Kill You

??? Did I leave my computer signed in at work?