I was going to start this post with something to the effect of "It's that time again," but then got a strange deja vu feeling and decided to avoid that at all cost. I feel like I must have started a bunch of posts that way. Deja blog. So, we'll just jump right into the Friday funfest.
HEY! The Olympics are back! It seems like every two years, we have another reminder that the international community hates Chicago. Not that we could feasibly hold the Winter Olympics here - although they could probably set up the slalom on that landfill out by O'Hare, but still. We Chicagoans love out chips on our shoulders, and the Olympics are no different.
Somehow this year's Olympics crept up on me. Opening ceremonies are tonight already. I probably won't watch - I'm desperately looking for something else to do with my night - but for those of you who will watch, prepare for a very polite opening ceremony. 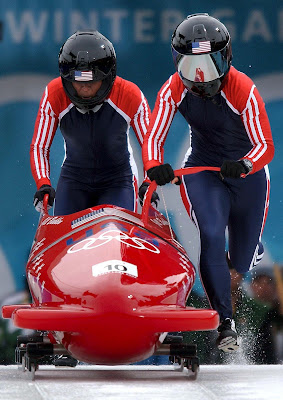 "Come on, Nat. Don't you want to watch us charge down hill in tight fitting space suits?
I found this little bit interesting: apparently there will be some protests at the ceremonies from Canadians who, among other things, will voice their irritation over the cost of holding the games. Expect such time honored Canadian protest traditions as the unified throat clearing and that famous chant "Pardon Us, We Would Like to Voice Our Grievances if This is a Convenient Time for You," sung in both English and French!
Also On The Docket This Weekend: Valentines Day which, unlike the Olympics, is sadly unavoidable for most of us. But attention must be paid, love birds! This year, I will have to draw the line at seeing this little move about Valentines Day, aptly titled Valentine's Day. This film is the recipient of a 16% crappy movie rating courtesy of Rotten Tomatoes as of noon today.
"But... but... but it's got Ashton Kutcher! I've never seen Ashton Kutcher in a movie I didn't like!"
Do you know why that is, Self?
"Why?"
Because you don't watch Ashton Kutcher movies. No, not even Dude Where's My Car. I won't let you.
"Oh yeah. Thank you for that."
You're welcome, Self.
Snowing in Rome: Who cares? I do. Because when I get tired of the persistently crappy Februaries around these parts I often like to take little imagination trips to Rome to remind myself what it's like to live in a place that doesn't have five foot tall snow banks between the sidewalk and the street. Alas, another bubble popped.
The Bastardizing Powers of Tom Tancredo: This is a bit old, but I'll mention it anyway just because I find the whole Tea Party thing to be an interesting phenomenon. Simply for watching the "party's" slide from a legitimate outburst of ideological indignation over the banking bailouts to, well, this.
"People who could not even spell the word 'vote', or say it in English, put a committed socialist ideologue in the White House. His name is Barack Hussein Obama"
Another nugget courtesy of the CNN, "The former congressman known for his strong opposition to illegal immigration also attacked "'the cult of multiculturalism, aided by leftists, liberals all over who don't have the same idea about America as we do.'"
Thanks, Tom Tancredo. Your opinions are valued here and not at all ignored on the basis that what you just said is ridiculously stupid. And congratulations, Tea Party, on your choice for opening speaker for your very first political convention. May you have many, many years of people taking you seriously. What are you guys about again? Taxes? Neat-o.
Ugh.
Posted by Unknown at 9:23 AM