Snowmanteau and Other Made Up Words

Snowmanteaus are all the rage, baby! 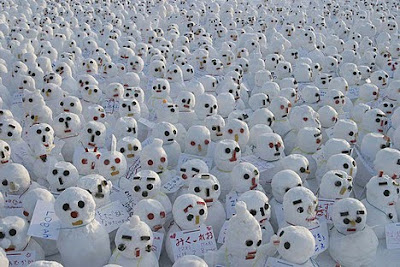 What's a "snowmanteau" you ask? It's a combination of the words 'snow' and 'portmanteau.'

What's a "portmanteau" you ask? It's a word that means combining two words into one as a means of showing what a clever jackass you are.

Thus, a snowmanteau is a combination of snow and another word, particularly when used to demonstrate the severity of a snow storm.

Recent examples of snowmanteaus from the news:

Get it? It's like the end of the world, but with snow! Ah! Yes! How droll!

Since snowmanteaus appear to be all the rage, I have asked the Clever Title Research and Development Team* to invent some additional snowmanteaus, in the hopes of getting ahead of the clever jackass curve.

BEHOLD THE FRUITS OF OUR LABOR:

I would like to donate the above to the general use of society, for the betterment of human kind of course.

Go forth, my friends, and Be Clever!

*In this case the "Clever Title Research and Development Team" consists of me, my underwear, a thesaurus, and a pint of Edy's ice cream.

My god! I can't believe I missed that one.

And ... Vanessa says you missed Tsnownami too!

Ha. Tsownami is badass. I was going to comment on how much I liked Snowzzard, but you just got pwned.