Want to host the Olympics? Maybe not such a good idea after all.
I mean, yeah, on the one hand it can showcase your host city to the rest of the world. On the other hand, it can also highlight the fact that you're not able to keep ice cold. IN CANADA.
Yikes.
I haven't been watching too much Olympics; I catch just the occasional evening highlights and inexplicable special interest pieces on polar bears that have absolutely nothing to do with gaming.
Apparently, if I had been watching, I would have been made aware of a litany of mishaps, which include one tragic death even before the opening ceremonies, a malfunctioning pillar during those ceremonies, malfunctioning ice surfacing equipment, rain, melting snow, poor logistical planning at the down hill skiing facilities which have caused the cancellation of 2,000 tickets (all detailed in this article from the Seattle Times), and now the injury of nineteen people when a barricade collapsed during a free concert.
This in half a week.
I really feel bad for the people injured by the barricade. Not only for the injury, but for the fact that it happened during the Alexisonfire set who, apparently, suck. You don't have to take my word for it, but I recommend that you do.
The question becomes why? Why are these games seemingly doomed to constant gaffs, mishaps, and tragedy?
Some blame the VANOC (the organizing committee), some blame poor luck with the weather, or just general freak accident.
I have a pet theory. Meet the Vancouver Olympic mascots: 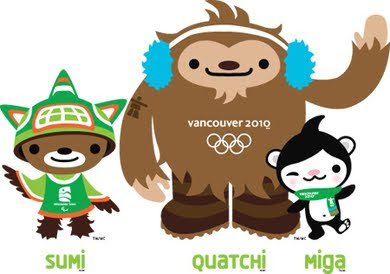 These are Sumi, Quatchi and Miga. When strung together in the indigenous tongue, their names mean "These Lands Are Cursed." If you want someone to blame, blame these adorable little corporate creations. Especially the one on the end there with the cowlick and the moustache. Adorably sinister.
Mystery solved.
Posted by Unknown at 11:09 AM