All right, Friday. What do you have for us today?


I’ll Tell You What: CHUCK FREAKING NORRIS: For those of you LIVING UNDER A GODDAMNED ROCK, this past Wednesday marked the 70th anniversary of the day Chuck Norris shot out of his mother’s womb and began choking rattler snakes, fighting evil and wearing cowboy hats.

Chuck Norris has been the occasional subject of bloggage here at Clever Title, stemming from this post about his hypothetical Presidency of Texas. In honor of his birthday, there have been Chuck Norris facts walloping this Twitter thing (and in many languages, I might add). My personal favorite? “Chuck Norris has already been to Mars. That’s why there are no signs of life there.” Winner of the Most Tasteless Award? “People seem shocked by Corey Haim’s death on Chuck Norris’ birthday. But Chuck Norris doesn’t gain years; he takes them. More to be found here. 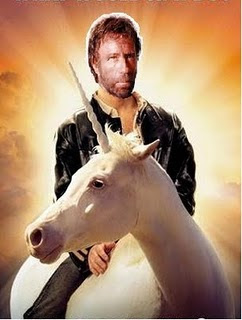 Ride on, Chuck Norris, and godspeed.
While We’re On the Subject of Patriotism: (note, Chuck Norris = Patriotism) here’s a blog post by a sports blogger from my home state about how the Chicago Blackhawks’ National Anthem tradition must die. I’ve never been to a Blackhawks game, but I’ve heard that the National Anthem is kind of a cool thing – they have an Opera singer sing it, and the crowd gets into it and starts cheering and hollering and so on. According to this blogger, Rob Otto, this kind of enjoyment is disrespectful to the armed forces.

Far be it from me to defend a Chicago sports institution, but give me a break. Heaven forbid people actually express their pride in being American. Have you ever been to a sports event where everyone just stands around with their hand over the heart, shifting their weight back and forth, moving their lips like they’re singing but actually just wishing the game would start? Of course you have; that’s 99% of all sporting events.

People tend to equate quiet with respect. I don’t know. I’d rather people sing poorly, hoot and holler and enjoy themselves. This is America, goddamn it.

End digression. What else have we got?

Well, we’re out of Patriotism stuff. How about food?

Have you heard how New York is trying to Outlaw Salt? Oh great! While we’re at it, can we ban raw onions? And capers? Capers weird me out. I don’t know why. How about just getting rid of taste altogether?

I guess the next front in the continuing quest to outlaw fun, Felix Ortiz of Brooklyn has proposed legislation to outlaw “…salt in any form in the preparation of any food for consumption by customers…blah blah blah.” As anyone who has ever cooked anything would say “Are you freaking nuts?”  Banning salt not only affects how salty your food tastes, but also makes the chemistry of baking impossible, as well as cheese.  So, that asiago cheese bagel you had this morning, Mr. Ortiz?  Doesn't exist.

How about we outlaw knives too, because they are sharp? And heat too, because sometimes food gets too hot and it burns your mouth?

Hey, want to avoid eating too much salt in your food? Don’t eat salty foods.

I was just at a Blackhawks game yesterday and along with the anthem singer there were two soldiers from the armed forces (Marines and Army I think). As soon as the anthem starts people clap and cheer like maniacs and continue to do so throughout the whole thing. In fact it even ramps up big time during the "rockets red glare" part and even more during the "our flag was still there part". The two previously mentioned soldiers certainly didn't look like they were upset or disrespected in any way. Oh, and later in the game the soldiers were put up on the jumbotron again and got a massive standing ovation.

Yeah, see? I count that as a GOOD thing, not a disrespectful thing.