Come to the City: We Won't Kill You

I won’t say where, but lately I’ve been seeing a lot of ‘anti-city’ sentiments from certain areas of my internet social sphere. For fear of igniting an electronic flame war, I won’t say who or what specifically but if they are reading this they know who they are.


The crux of the argument is that certain cities – my own adopted Chicago included – are filled with deranged criminals bent on the destruction of all life and property, and that anyone who would want to move into a city is taking their life into their own hands, and can only be saved by the intervention of the National Guard. It is far better to live in the suburbs, where crime never ever ever ever ever ever happens.

Unfortunately, not all of us want to live out where the leprechauns and unicorns frolic, where Applebees are plentiful and where no baby ever cries.

And so, ever year, young suburban lads or lasses announce their intention to move where the population density is high – to be closer to a job or to be where they don’t absolutely have to drive everywhere they go – and without fail at least one person begins the wringing of hands and wailing and gnashing of teeth. ‘Doom!’ they predict, ‘Doom and unmitigated disaster! You haven’t signed a lease yet, have you? It’s not too late!’

Even in moving to Chicago, despite the general positive reaction I received by the vast majority of people, I was still met with the occasional confounded “Why?” 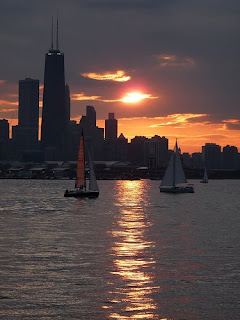 You can argue culture and convenience and excitement and renewal until your throat dries up and you run out or words. You live in the problem that suburbs were created to solve. Nothing you can say or do will convince them otherwise.

As for the city? Yeah, it’s more dangerous. I’m not going to argue the statistics. That said, even a city like Detroit – a city that I’ve joked always has at least one building on fire – is livable and, at times, even pleasant.

This is where museums, theatres, riverfronts, lakefronts, parks, and many other wonderful things tend to congregate.  The city is worth a visit or, dare I say, worth calling home.  Like anything else, though, you just need to know how to live in your environment.

So, I’ve put together a couple of tips for those of you venturing into the city. These should help decrease your chances of having a prejudice affirming nightmare visit your next time you come down town.


You city dwellers with any additional tips, please leave them in the comment section.

8. It is actually okay to smile and say hello to people on the street: They aren't going to pull a gun out and shoot you for being kind. But on the same note, don't be overly friendly. You don't want to encourage creeps or pervs.

9. Ladies, carry your phone on your person, not in your purse: In the event that your purse becomes separated from you, you will still have your phone to call for help.

10. Don't walk around looking scared. This will either make you an even bigger target, or really piss people off, or both. Walk with purpose and confidence.

11. Don't stare at the skyscrapers.

12. Don't stare into the eyes of a parking lot cat. They can suck your soul out with their eyes.

13. Avoid walking or urinating in alleys, unless you like to have sex with hobos.