Over the weekend, the best baseball girlfriend ever, her brother and I took in a showing of that dandy motioned picture show entitled "Iron Man 2."

Before going, we got dinner at a pizza place in Schaumburg - can't remember the name.  It was good.  Family pizza parlor kind of thing: kids running around while parents are drinking beer.  No, not Chucky Cheese.  What's it called?  Anyway.

We're sitting in our booth; I'm watching college softball because it's on the TV for some reason and I can't help but to glance at it occasionally because of the bright flickering lights, when suddenly my girlfriend and her brother start laughing.  'What's so funny?' I asked.  Apparently some kid near us had shouted 'Popsicles!'  No context to the outburst, just a little voice shouting 'Popsicles' with all the glee that a little kid can muster.

Sometimes you just want a popsicle.  Why?  Because they make you happy.  There's no nutrition to speak of; the damned things are mostly frozen corn syrup and food dye.    But damn it: it's Saturday afternoon and I just spent the past week running around with little to no free time for myself.  I want a popsicle.

Iron Man II is a popsicle. 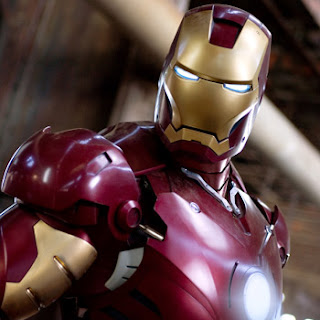 "I am a popsicle.  Lick me."
I could summarize the plot, or say something about how the sequel is good but not as good as the first, but really who gives a damn?  Can we be honest for a minute?  There are explosions, there are hot cars and cool special effects, there are battles with robots; there are attactive women running around; there are super cool actors like Robert Downey Jr. and Mickey Rourke.

There's probably no artistic value to it other than to reinforce the fact that archetypes are archetypical for a reason, and there's certainly no omega 3 or whatever.  Who cares?  Look outside: we're halfway through May going into summer.

Iron Man, kiddies.  It's cold, it's sugary and it's artificially red.  Treat yourself.
Posted by Unknown at 9:12 AM