Exit Through The Gift Shop - Hey, I Really Could Do That!

Saturday was a bit gloomy so instead of running off to Chicago Bluesfest, the lady and I took in a screening of Exit Through The Gift Shop.

If you have not seen this movie then I highly recommend it to you.  It's fascinating, educational and sweetly yet bitterly funny.  I'm going to try not to ruin the movie for you, but if you're afraid that might happen I recommend clicking somewhere else and coming back later for your usual dose of dick jokes.

Exit Through The Gift Shop is a documentary about compulsive filmer Thierry Guetta - basically a French guy with a camera and a whole mess of tape - who infiltrates the world of graffiti artists by claiming he's a documentarian, and his gradual transformation from voyeur to eager participant to counterculture artist in his own right despite having no discernible artistic abilities of his own other than perhaps enthusiasm and an entrepreneurial spirit.

The tale is told by Banksy, the famous British pop graffiti artist responsible for such works as this: 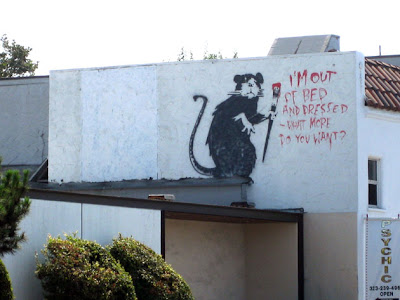 However, the most interesting part of the movie is Guetta's transformation and the ramifications for Banksy and artists of his ilk.  One of the tenants of this type of art is that anyone can be an artist anywhere and at any time.  Banksy himself tells of how he used to encourage people to make their own art.  Following the story of Guetta's strange metamorphosis, Banksy tells us, "I don't really do that anymore."

At the end of the movie, those artists responsible for Guetta are left wondering what they've wraught in Mr. Brainwash and what it means for their art and it's worth.  There aren't any answers really; just some worthwhile questions and a generally disturbed yet satisfying feeling that is entirely fitting.
Posted by Unknown at 10:08 AM

This is so weird, I was googling Banksy this morning before I read your post bc I'm pretty positive I might have stumbled upon one near the dequindre cut a few blocks up from the river the other day... I googled it and there are 5 known ones in Detroit, one of which just showed up this week, and the one I think I saw was not any of the ones described... I think I have to go look for it again!! Weird, huh??

Just kidding! I went to his website and it's on there - the one with a little boy that says "I remember when all this was trees." It was on the detour I've been taking to get down to the dequindre cut but it has since been ripped out and taken to a gallery (it was on the ruins of the old Packard plant - they are ripping down the buildings around it). Now I know why I haven't seen it in a few days. I drive that stretch about three times a week and it seemed to appear overnight, stuck around a while and then disappeared overnight! How fun that I stumbled upon it and actually knew what it was!