First thing’s first: let’s get the obligatory plug out of the way:

Sorry about the intermittent posting around here. Work has been like this lately: 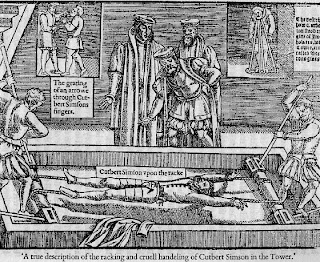 I would be ‘Cutbert Simion vpon the racke’ laying down there. It’s difficult to post when your hands are tied to ropes that run to a gigantic crank that stretches you out more and more and more. I’m sure you understand.

But dash it all it’s Friday. And here in America Friday is a cause for celebration. We celebrate today with articles gathered during the week:

WHITE CASTLE DOES NOT NEED TO DEFEND ITSELF

White Castle is like that last drink of the night; it’s unnecessary and will only make you feel sick in a couple of hours, but damn it it’s delicious and I want it so let’s keep this party going. Apparently, some people take issue with the fact that White Castle prefers their deep fried manufactured chicken product in ring form and not as nuggets. These people regard the shape as blatant disregard for anything remotely chicken-like: chicken does not occur naturally in ring form.

I prefer to think of White Castle as speaking the truth here: your Mc Nuggets are processed pieces of disgusting deep fried breaded crap too. White Castle at least has the decency not to lie to you and try to make you think you’re getting something you’re not. It’s a ring of salty breaded chicken parts. If you like that kind of thing, consume at your leisure.

KEVIN COSTNER TO THE RESCUE

It may have all been downhill from Dances With Wolves (although I still prefer his unabashedly non-English Robin Hood) but Kevin Costner is still trying to make a difference. This time he’s going Water World (the Postman on the high seas) on the oil spill with an invention that separates oil and water at high speeds. Hooray for you, Kevin Costner. Your testimony before congress might make us wonder how you ever became a famous actor, but at least you are using your clout for good and not evil.

Side note: the rig that exploded and caused the whole oil spill mess was called “Deepwater Horizon.” This is the type of name reserved for really bad b-movie disaster sci-fi flicks from the 90’s. Nobody should be surprised that something disastrous happened here. My recommendation: we start giving these rigs less ominous sounding names. It’s not going to stop the current spill, but it can’t hurt.

At least you're not pulling human heads out of a package.  I may be pulling a Cutbert today, but maybe I shouldn't complain.

Sorry, folks. I know it’s an international event – like the Olympics – but I just can’t get behind the soccer.

The other day, we were watching it at lunch. I was transfixed for a while, watching the ball bounce back and forth and back and forth in a triangle, waiting for something to happen. Thirty minutes passed and finally someone scored. The first thought that came to my mind was, “That’s it? That’s what I’ve been waiting for?”

I don’t know. Maybe my patriotism is defective. I’ll get behind Olympic hockey. Soccer is one unnecessary pass too far for my taste.

Courtesy of the Onion. Enjoy:

Soccer Officially Announces It Is Gay