Matisse and His Obsession with Nude Ladies

This post will likely be completely useless for your purposes because the subject is an exhibit at the Art Institute of Chicago, and that exhibit closed on 6/22 - which I didn't know until today when I went to look up information on the exhibit.  So, read on if you have a few minutes and want to hear some dude talk about art for a couple of minutes.

My family was in town over this past weekend for Father's Day and also to see my show (12 Angry Sketches, one more show this Friday cough cough) and while they were here we trotted on down to the Art Institute to check out the show.  Apparently blissfully unaware that it was closing the next day.  This explains why it was crowded so early in the morning.

Anyway, there were paintings.  What do you care?  Particularly since they are paintings from a very short period of his career (1913 - 1917) and most of the paintings were bizarre and the nude women unattractive.

I'll tell you why you care.  Because you may possibly have a creative streak, or have some sort of God given talent, and you need a reminder that just being a creative person doesn't immediately sky rocket you to the pantheon of greats in your chosen profession.

No, my friends, you have to work at it.  And that's what the exhibit was about: Matisse's obsession with the essence of construction and form and how to express that in his artwork.  Every piece of work in that exhibit fed and informed one another, showing Matisse's penchant for returning to the same subjects and the same ideas over and over again.  The whole show became a testament to revision, honing of craft, and the realization that even when one painting is complete there is still more to explore in the ideas and the creation of it.

The result is that you have an artist who goes from something like this painting completed in 1908... 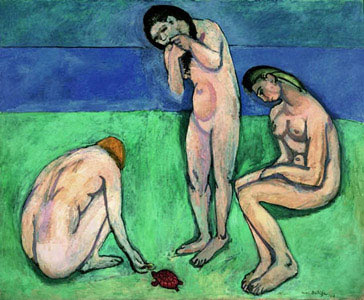 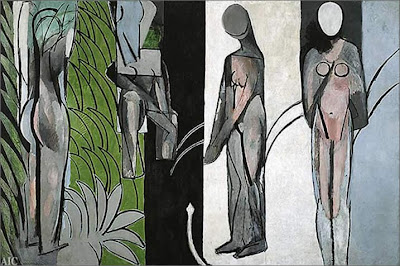 Both of these paintings are of bathers.

And yeah, painting from 1916 is a strange grayish portal to the bizarre for those with a more classical appreciation of the arts.  But it also marks a great step forward in innovation and creativity for the art of painting; steps that were not really possible without the constant work and constant refinement by it's creator over seven years.  And I think it's pretty cool looking, too.

So let that be a lesson to you, creative types - whether you be a painter or sculptor, or just a comedy writer or performer - craft is as important as creativity
Posted by Unknown at 10:11 AM

Whoa. Very nice commentary Bud. Enjoyed your insight. Also sorry to admit I didn't put as much thought into enjoying the exhibit.