Friday Will Pass on the Heart Attack Sandwich, Thank You

The weekend, baby; we’re almost there. I even had a short week, but with the heat and the resulting lack of quality sleep, I’m about ready for some no-prior-plans weekendy goodness.

There’s still time left on the clock, though, so let’s knock a couple of items out, shall we?


We can call today’s episode the ‘Faith in Humanity is Momentarily Restored’ episode. 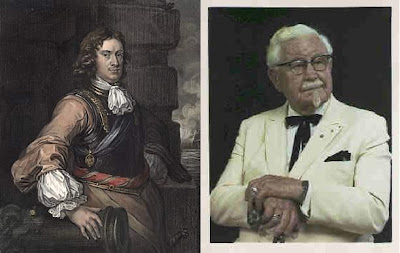 A Bunless Sandwich? What, Are You Trying to Kill Us? Ladies and Gentlemen, KFC’s apocalypse of calories and fat known as the ‘Double Down’ has failed to sweep the nation by storm.
For those of you curious as to what the hell a double down is, you can find a picture on it from my original post about it here.

Thankfully, the general populace innately sensed that a sandwich without bread is not a sandwich. Yes, we may love our sausages wrapped in bacon and then covered in a delicious glaze of sugar, spice and fat, but even we have to draw the line somewhere. America, you’re not as fat and prone to poor decision making as the rest of the world believes.

A Quick Detour Into History!


EARL OF SANDWICH
I fear I grow peckish, and yet I wish not to leave this rousing game of Go Fish I am ensconced in with my good friend, Baron Montagu.


PONCENBY
If you wish, I can have the chef prepare something for you. Mayhaps a crock of deepfried goose testicles would satiate your appetite?


EARL OF SANDWICH
No no no, you dumb plebe. That’s far too heavy. Instead, take a half pound of fried bacon, three types of cheese and some of that disgusting sauce we use to mask rancid meat and stick that betwixt two chicken breasts.  And deep fry those chicken breasts in batter and lard, for good measure!  Bring that to me post haste. And also, I wish to name this creation after myself.


EARL OF SANDWICH
No, you pile of dung! Call it the ‘Double Down.’ After my sexual habits.


BARON MONTAGU
I say, Early, that sounds rather delicious. Put be down for a Double Down.


EARL OF SANDWICH
I daresay I’m licking my chops already.


BARON MONTAGU
Would you like a cigar whilst we wait for our tasty treats?


EARL OF SANDWICH
Why yes, that would be excellent.


EARL OF SANDWICH
Zounds! A Smirnoff Ice! You have bested me, Baron Montagu!


BARON MONTAGUE
You have no choice but to fall to one knee and immediately consume this beverage in its entirety!

The Gulf of Mexico – Now With Less Oil! According to BP, that oil well that has been gushing since April has finally stopped. Of course, BP cautioned that this is the first step and that it’s possible depending on the pressure at that cap that there could be additional SHUT UP BP JUST LET US HAVE OUR GOOD NEWS ALREADY!

Of course some people, like RvD’s very own Chris Othic, refuse to accept any other explanation than the well ran out of oil.

And Finally, what better way to celebrate the end of the work week than with a visit to The Playground tonight. CRASSUS will be there! Songs will be sung, comedy sketches performed, and either laughter or tears will ensue.  Tonight at 10 for $10!
Posted by Unknown at 9:42 AM

Next RvD show will be entirely written in Olde English style. I give this sketch 4.0.

I like it. Open Stage night at the Globe.