Late on the LeBron Thing, But Here Goes Anyway

Did anyone watch the ESPYs last night? I didn’t think so. Me neither.


It can be very easy to be tricked into believing something is incredibly important when, in fact, it is not at all important. Sports fall into this category. Entertainment does as well. I would include sketch comedy in this, but who am I kidding? Nobody thinks sketch comedy is important.

Where LeBron James decided (Miami) to go (Miami, I told you already) certainly qualified as something ultimately unimportant that was treated as gravely important (South Beach, Miami, to join two superstars already on the roster).

He ended up picking the Miami Heat, by the way. Don’t know if you all saw that coming.

I like sports; I like to watch them and I follow them. Sometimes I can be irritating about it. My poor girlfriend will attest to this.

But even I, who thinks it is incredibly important to play dress up and act like an ass in front of groups of people, will admit that some shit just isn’t that important.

Yes, whole industries have sprouted up covering Sports and Entertainment and Music, employing millions and millions of people devoted to dissecting every possible conversation and club appearance and court date etc etc, and where would those jobs go and what would those workers do if they weren’t following around LeBron James/Lindsay Lohan/Tiger Woods?

And yes, sometimes things can be construed to be good lessons for all of us about how to live our lives and be more like Drew Brees or forgiving like a certain pitcher from a certain baseball team that will not be mentioned here.

But if you have convinced yourselves that the entire well being of your city hinges around the decision making process of a 25 year old with millions and millions of dollars who just so happens to be great at bouncing an orange rubber thing up and down a parquet wooden flat surface and then putting said rubber thing into a meshy thing that’s hanging above aforementioned flat surface then this is what happens. Meltdown.  In ridiculous fonts.

And if you happen to be a 25 year old who has been fawned over and paid handsomely for your ball bouncing abilities since high school, then of course you’re going to hold an hour long egomaniacal circle-jerk love fest to announce your intention to dominate the entire world by getting together with a bunch of other really talented rich people and putting said ball into aforementioned net more times than everyone else who gets paid millions of dollars to do the same thing and BEHOLD THE MERCHANDISE! 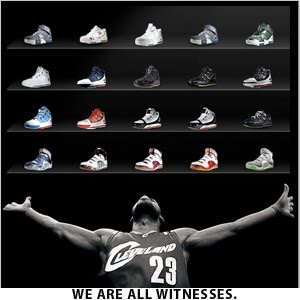 It's all about the shoes, bitches.

LeBron has not invented a cure for cancer and is only sharing it with one American city and for the love of GOD COME SAVE US FROM CANCER, LEBRON! This is just basketball.

Dear children: LeBron is not a hero. Sports stars and movie stars are not heroes. Heroes are people who are revered for figuring out how to do something good for large amounts of people at the cost of their own well being, not for doing something trivial for their own benefit.  There's nothing wrong with making a buck off of dunking over some fools, but don't pretend like it's an act of heroism.

Dear Cleveland: you don’t need a superstar to win your champion. I remember a certain team from 2004 who were pieced together with a bunch of castoffs and given no chance to get past the first round or two of the playoffs but managed to topple both Kobe and Shaq.

Dear people: it’s okay to get a little carried away. Sports are fun, and a good escape from actual important things. Just keep it in proportion, huh?
Posted by Unknown at 11:48 AM

When are we announcing that you, me and Becca are joining Think Tank to make a run at Best of Sketchfest for the next five years?

As soon as we can convince TJ Jagodowski to take a paycut and join us.