Four days after the fact, but here it is anyway!

As we’ve done before, Katie and I took a long weekend and spent it frolicking about in the great northern wilderness. The only difference is that this time, through the assistance of Wunderfone, we were able to record some of that ol’ Wisconsin charm. Behold, my trip log!

We left last Thursday afternoon – I drove out to Katie’s place in the suburbs after work, we packed up the car and headed north. Since it was already kind of late, we stopped for dinner on our way up. What’s more Wisconsiny than Culvers?

I’ll tell you what. THE WORLD’S LARGEST CULVERS 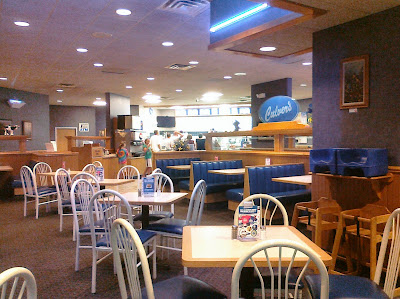 Located in Milton, WI, THE WORLD’S LARGEST CULVERS (and yes, apparently someone is keeping track) features a gigantic dining room, a conference room, an ATM, artwork that is for sale, and of course milkshakes (which, I mean, you can get at any Culvers, but they’re good, so, yeah).  No idea how this stacks up with, say, THE WORLD'S LARGEST KFC, but it was impressive nonetheless.

A picture of my lovely girlfriend enjoying a refreshing Culver’s fountain drink: 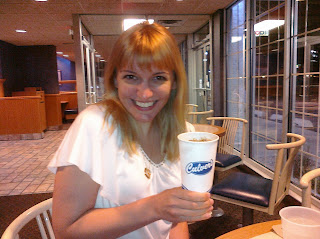 And a picture of me posing with an inanimate object: 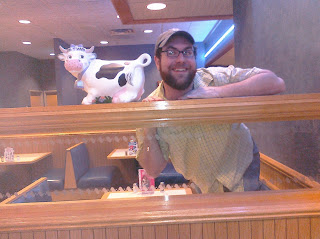 We rolled into Eagle River, WI very late and ran to the grocery store to pick up some supplies (breakfast foods, mostly, and a toothbrush) and finally made it to Katie’s family’s cabin at… 3 AM. YIKES.

What happened on Friday? I’ll tell you what: sleeping. Something about that north woods air, man. It’s like carbon dioxide poisoning. But in a good way!

I then proceeded to take a picture of this: 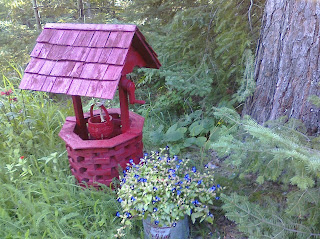 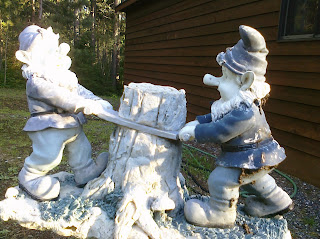 That last one will haunt your acid trip nightmares for the remainder of your days. No idea why I felt the need to take those pictures. Maybe I was trying to prove that Wisconsin is a gnome’s paradise. Whatever the case may be, they’re on the blog now. So deal. 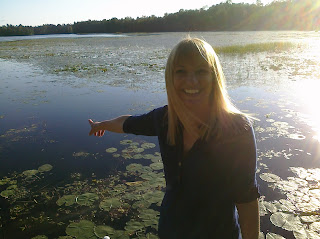 That’s Katie, pointing to where the fish live.

If there’s one thing Katie loves to do in Wisconsin, it’s fish. She fishes like a madwoman. She was brought up fishing. She dominates in the pan-fish catching department. I, on the other hand, have never been a fisherman. Regardless, the competition was on! Who would catch the most fish?! 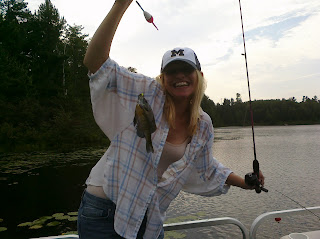 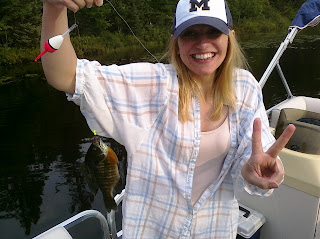 Fish #3 through#6 went undocumented. They were all Katie fish. How many fish did Nat catch? In answer to that question, here’s a picture of our feet! 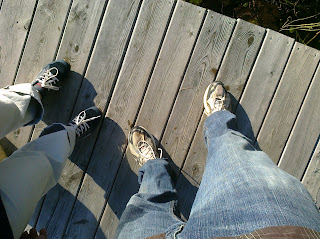 That should answer your question.

As usual, I compensated for my inability to perform life-saving, essential tasks such as catching aquatic pieces of protein by taking pictures of myself with inanimate objects. If there’s one thing they love in Wisconsin (aside from cheese, football, fishing, snowmobiling, brewing beer, cussing out people from Minnesota, etc.) it’s bizarre statues.

Here’s me at the delicious White Stag restaurant, where we had dinner with Katie's parents (I highly recommend this place, it's great): 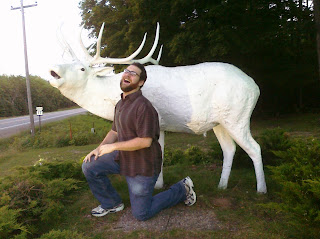 Here’s a picture of me with this thing: 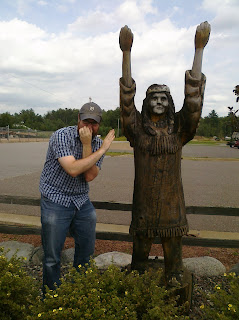 Here’s a picture of Katie commiserating: 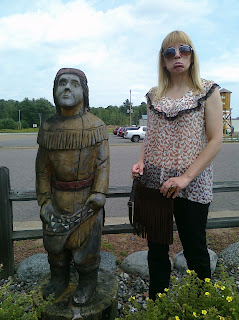 Here’s a picture of us getting out heads cut off by a couple of lumberjacks in a parking lot: 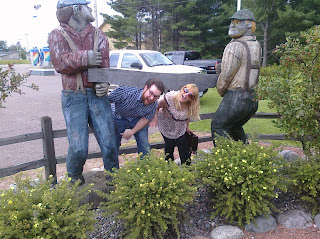 And a picture of Katie’s mom (photographer on that last picture) meeting the same fate: 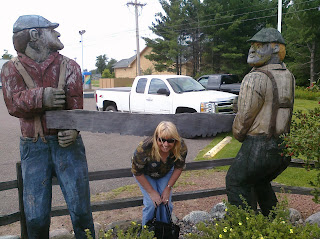 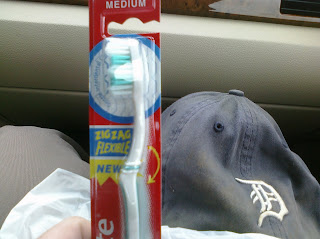 Not so fast, my friends. Turn it around and read the instructions. 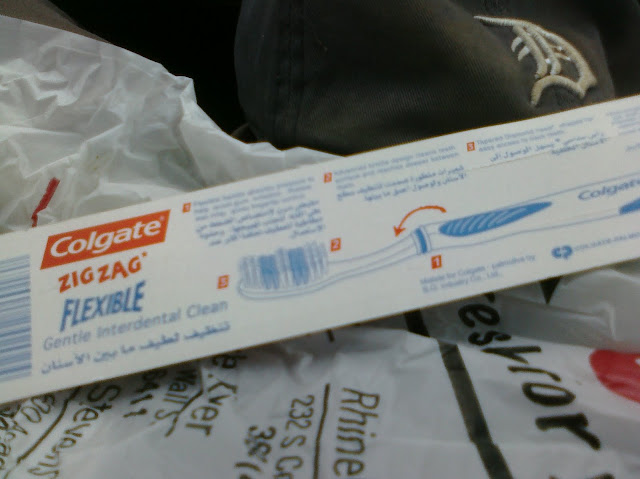 It's a little hard to make our, but those instructions would be in poorly written English and Arabic.

Apparently Wisconsin imports their toothbrushes from the Middle East?

AND THEN WE CAME HOME

On Sunday night. We didn’t want to leave the picturesque confines of the north woods but, alas, money must be made and Monday is as good a day as any to do it (and yes I’ve just admitted to counterfeiting money on my own blog.)*

Good times were had, though. As evidenced by the fact that I had to drag Katie away from the lake. 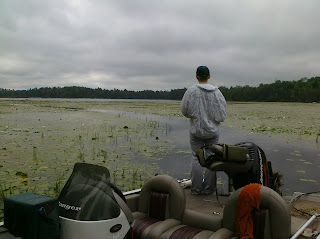 ‘There will always be more fish. Also, it’s about to rain.’

*Dear US Government: I don’t actually counterfeit my own money. I can barely count. Please don’t arrest me.
Posted by Unknown at 10:08 AM

As a testament to your comedic abilities, I laughed while viewing this gratuitous collection of vacation photos. Sincerely, the pictures had loads of charm and mirth. And now I'm jonesing for cheese. Here's wishing you continued wellness, Nat!