Nat Topping is a Faking Faker

This only goes to confirm what I have suspected all along: never trust anyone named St. James under any circumstances. Even the good Saint James the Just himself. Just my foot.

Also reinforced by the aforementioned article on the Chicago Tribune: don’t trust people on the Internet.


By now this should be common sense. Apparently, it is not.
Q: Some random Internet guy named “Jesse Jubilee James” fires up a conversation with you on a ‘Deadwood’ message board. He’s a firefighter who knits, grows llamas, writes poetry, and makes plaques out of logs after forest fires to commemorate his love for you. Is he,
If you answered ‘E’ then I’m sorry, I don’t know what to tell you. Don’t talk to strangers.


But alas, in 2005 there was no Catfish, a movie that dealt specifically with this issue. Not that it would have mattered, because very few people saw it anyway, despite it being a very good movie.
And thus you have confusion, heartbreak, betrayal, and a lawsuit. Again, don’t talk to strangers.


Don’t get me wrong: I don’t mean to blame the victim entirely. However, I feel that criticizing St. James of Batavia would be hypocritical, given that I myself am fake.
ORGAN STING!
No, it’s true.* Up until now, you have known me as I have presented myself on the Internet: a late-twenties pasty white dude with a beard working at a non-descript job while trying desperately to get people out to see his comedy shows. It has all been a façade.
In truth, my name is Rebecca Flimingston. I live in Plum Springs, Ky with three cats and my husband Dan. Here is a picture of me: 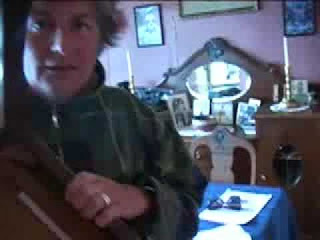 As you can see, I am afraid of cameras. I also have a nice living room, an excellent pair of sunglasses that I use as a paperweight, and this is my favorite song in the world.
Since we’re being honest: my life is boring. There’s not much to do in Plum Springs, Ky and, while I could sporadically blog about taking trips to Bowling Green to visit the Historic Railpark and Train Museum, nobody gives a damn about any of that.  Honestly even writing this now makes me want to claw out my own eyes.
So let’s just go on living this little lie, shall we? I’m Nat Topping. I’m a late-twenties pasty white dude with a beard, and I want to be your lover.
*And of course, by 'True' I mean completely made up.  Now you don't know what to believe, do you?  THE INTERNET IS USED FOR EVIL!!
Posted by Unknown at 9:03 AM

Email ThisBlogThis!Share to TwitterShare to FacebookShare to Pinterest
Labels: Fakery, Pictures of Ladies, Suburban Housewives are up to no good, The Internet Is Used For Evil