Shark vs Surfer. Who Wins? Putin, That's Who.

With all this talk about the end of the world (or lack thereof) you would never even know there's an election coming up.

That's right, next year.  A Presidential election, where the forces of Good and Evil collide, Righteousness does battle with Corruption, and the Candidates match wits on a national stage inside of a Russian octagon of doom full of bears and weapons grade plutonium.

I'm talking, of course, about the Russian presidential election.

This upcoming year's election will likely pit former President and current Prime Minister, Vladimir Putin, pictured here staring into your soul and seeing that thing you did on the playground when you were twelve that you've aways regretted... 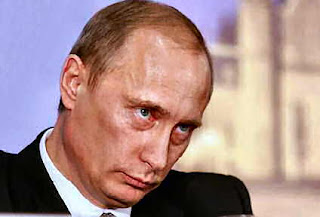 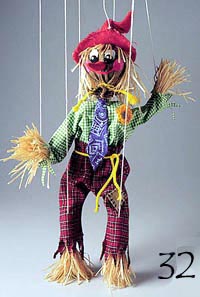 The question is as old as time: old and authoritarian versus new and cuddly.  Kremlin versus Zeppelin.  Tiananmen versus Twitter.  KGB versus OMG.  I could go on if I knew more Russian/Authoritarian nouns.
Okay, one more: Pol Pot versus iPad.
Anyone, I never claimed to be much of a prognosticator (unlike SOME people) but this is how I imagine it will play out... 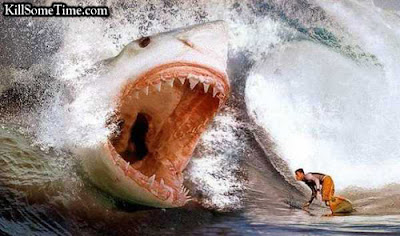 ...where Medvedev is the surfer, and Putin is the gigantic insane looking shark.  You know Putin's not the surfer, because if he were that shark would already be dead.
I guess what I'm trying to say is: expect more nonsensical Putin posts in the near future.
Posted by Unknown at 2:27 PM