I took a quick break from reading the magazine I bought in the airport terminal to take a look out the window.  I don't remember what the captain said our cruising altitude was, but we were up above the clouds.  A field of puffy white mounds stretched out in every direction and over in front of the plane somewhere the sun was setting.  Our plane was chasing the sunset.

Not a bad way to start a vacation, that.  Of course, nobody planned this little bit of loveliness; it's not like the airlines said, "Let's schedule a flight for this time; the trip should be really really pretty."  No, it was very much by accident.  I don't think many people noticed - a lot of them were watching Jane Eyre or whatever nonsense was playing on the in-flight movie - but I saw it and I loved it.

That's pretty much the theme so far: I saw it and I loved it.

When my Dad took a job outside of Los Angeles almost a year ago, the immediate thought was 'that's so far away, when are we ever going to see him?'  But now that I'm on vacation (and sweet lord did I need a vacation) it has worked out nicely.  I'm staying in Laguna Beach, a place I have no business staying, for a little over a week, and I've loved every minute of it.  Here's a picture: 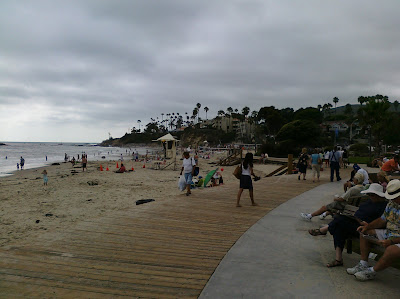 It was cloudy at the time of that picture.  It's even more beautiful when the sun is shining.

I'm trying to take it easy as much as possible and just enjoy being somewhere nice without trying to do too much.  That said, I've already been up to the Sunset Strip, out to Rancho Cucamonga, down to San Juan Capistrano, over to a slightly shady part of L.A. for some Karaoke and then back down to Laguna Beach and I've been here, what, three days now?

That's a lot of driving.  What can I say?  Can't help myself.

A couple of things I've learned about Los Angeles so far:

Californians - at least Southern Californians - like their abbreviations.  Pacific Coast Highway?  No no no, my friends: PCH.  San Juan Capistrano?  Wrong again: SJC.  You couldn't get away with that in Chicago.  If you were going down town along Lake Shore Drive, you wouldn't say 'I'll take Lake Shore.'  You would have to say 'I'm taking LSD.'  And that means something entirely different.
'Where you at right now, honey?'  'Oh, I'm on LSD.'  'Well, don't let me bother you.  And drink lots of water.'
One thing I've done since here, just to appease the comedy nerd side of me (as opposed to the other side: just plain nerd) is to go see a show at The Comedy Store.  Here's my fat head in front of the building:
So yeah, that's where I am.  I'll try to continue to blog, but I'm not promising anything.
Posted by Unknown at 5:54 PM

You should get some plastic surgery to fit in a little better. Maybe a nose tuck? Is that a thing? It is now.

I imagine you actually danced a little bit when you figured out the Lake Shore Drive joke.

Jesse, you know it.