When you don't have a car - in fact when the loss of said car is still something of a sore spot for you - it's very easy to forget about such things as 'renewing your driver's license.'

So recently I waded through the quagmire that is the Chicago office of the Illinois Secretary of State and took their written driving test.  Here is a sample question, for you soon-to-be Illinois drivers:

Q: The light at an intersection turns red.  You must:
(A) Speed up to get through the intersection as quickly as possible before anyone catches you,
(B) Check for traffic and then ignore the red light, speeding through the intersection as quickly as possible
(C) Bring your car to a stop, and then scream obscenities at nobody about how poorly timed the lights are on Halsted, I mean for Chrissake this is a major city - it's supposed to be a world class city - why can't people get their heads out of their asses and make this work, what the FUCK?!
(D) Bribe someone.

Of course, the worst thing about getting a new driver's license is the photo session.  I am apparently incapable of taking a driver's license photo without looking sweetly deformed or drunk.  In my latest venture, I've managed to do both.

Nothing boosts your self esteem quite like a driver's license picture.

I don't have a scanner on me, but using state of the art graphics imaging software (Microsoft Paint) I have recreated it for you. 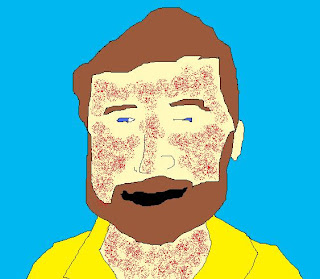 Note that one eye is significantly smaller than the other and that I look sunburned.  I look like a drunk Ernest Hemingway who's had the left side of his face bashed in with a mallet.

So, every time I get pulled over by the Illinois State Police (which hopefully shouldn't happen too much given the lack of car) they can expect me to look like that.
Posted by Unknown at 11:07 AM

are your artist services available for purchase? would you consider microsoft painting me a portrait for my facebook profile pic?

I could probably be convinced to do commissions.