Happy Thanksgiving: To The Ear on the Other Soup Can


In my day-to-day life as a working drone, I spend an exorbitant amount of my time talking to India.  This is what happens when companies outsource everything to another country.  I talk into one soup can, which is attached to a string that runs all the way across the country, through a tube under the ocean, past Hawaii, past Indonesia, through more ocean, back onto land, and over to Bangalore or Mumbai or Calcutta, and it attaches to another soup can.  Next to that soup can is a strange and foreign ear listening to me blather, an ear that under normal circumstances would never concern me in the least.  And likewise I'm sure.
Such is the marvel of the global economy.  This can be a good or a bad thing.  Obviously, there's the potential language barrier.  There's the residual 'they're stealing our jobs' angst hammered into me from a lifetime of Buy American.  And of course there's the general xenophobic distrust of foreigners.
But sometimes it makes for an interesting conversation.  Sometimes you get the tech who has a semi-confident grip on the language and he starts asking you questions:  'Do you know Pat?  I worked with Pat over there once.  How is Pat?'  As though Pat were some long lost friend from his youth.  Stolen from the cradle, tossed into a wicker basket and left afloat only for Pat to one day wash ashore in middle America.
The question I received this afternoon was 'What is this Thanksgiving Day you have?'
I was taken aback for a moment.  Sometimes you ask them to repeat their question because of the call quality or the accent (which can vary widely), so I did and he repeated himself.
‘This holiday you have tomorrow, what is this?  Thanksgiving Day.’ A slight pause and then, offered as explanation, ‘I’m in India.’
I’m not accustomed to explaining the significance of holidays.  Mostly I take them for granted.  Sometimes, I’m not even sure what the point even is of a particular holiday.  Flag day, for instance.  It’s a day to express appreciation for flags?  To celebrate the feast of St. Flag, and his innumerable contributions to the wellbeing of flagkind everywhere?
So I started, awkwardly:  ‘It’s like a harvest festival.’  They have harvests in India, right?
‘What does one do to celebrate Thanksgiving?’
‘Well, mostly eat.  Turkey.  And watch football.’
I imagined his thoughts:  This is what they celebrate?  A chance to eat even more than they already do and watch sports?  This constitutes a holiday in America?  And how does one eat an entire country?  So I explained further.
‘I mean, it’s like an opportunity for people to get together with one another and share food.  And, you know, give thanks for stuff.  Like being together, or, I don’t know.  And watch football.  It’s got a history to it: basically it marks the day the first settlers exchanged food with the natives.  Native Americans.’
Can I say ‘Indians’ to an Indian?  Probably not.  And yes, the story was an oversimplification, I know.  I’m not going to explain the intricacies of shoe buckles, nor am I comfortable going into the socio-political ramifications of the event, nor the irony, nor any of the rest.  But I couldn’t leave it at that.  I love Thanksgiving.  It’s one of my favorite holidays.  So I continued to blather.
‘It’s good.  It’s a good holiday.  I mean, it’s just a chance to get together with your people and celebrate being together and I guess just give thanks for having each other.’  I took a short breath, then added,  ‘And to watch football.’
‘I see’ said the mouth attached to the ear on the other end of the string.  I think this answer was acceptable to him.  Or he was tired of talking about it.  I hope he has something similar, though.  The idea of celebrating closeness with family, with friends, with other people is universally important.
No it is not the sexiest holiday (Mardis Gras, obviously).  It’s not flashy and cheerful like Christmas.  It’s not explosive and bombastic like Independence Day.  Thanksgiving Day is just a meal with your friends, your family, your loves.  And occasionally one or two people you don’t like or don’t know as well, but whom you can certainly tolerate for an hour or two.
Happy Thanksgiving,
-Nat
Posted by Unknown at 12:24 PM No comments:

A Letter to The Man Regarding Internet Anonymity


I understand that you are not in the business of being any fun. You’re The Man. Your job is to make everyone else’s lives miserable. I get that.

Apparently, your friends in the Department of Justice are asking Congress to make lying on the Internet a prosecutable offense.
I mean, if that’s the case then they may as well remove the Internet from being on the Internet. The whole point of the Internet is that it’s a lawless no-man’s-land of pornography, vice and convenient banking. If you take the lying away from that, all we’ll have left is pornography! Which is fine – pornography is great – but we’re really not making the most out of this wonderful tool of deceit.

We’ll all have to get our lying fix by lying to each other’s faces. That’s no fun! What if someone punches me? Next thing we know, you’ll try taking sports commenting away from us, and then what will we have?

To sum up, The Man, you can be a dick all you want. Just don’t dick around with my Internet.

...by wasting time on the Internet.  Just like all other holidays.  And all other days in general.  Generals are in the military.  The military is where veterans serve.  We've come full circle.

Happy Friday and Happy Veterans Day to all of you people who are veterans or know somebody serving in the military. Normally, this is where something dumb or jokey or sarcastic would go, but I’m just going to skip it today and just say thanks.


But now that we’re on a different paragraph, let’s take our quick Friday Jaunt Around The Internet. I hereby dub the following…


“Exercises in Uselessness”
Yes It’s Tiny, But It Gets Great Mileage

That’s what… she… nope, I stopped it. I stopped the joke.

Scientists are capable of some great things: space exploration, smart phone wizardry, the creation of gravity (how did things stay down on the ground before Newton?!). Sometimes, though, they do things like create the tiniest car ever using nanotechnology, and you’re left wondering what the point was of that. Unless, as I’ve suspected for a while, science is simply trying to create a real life TRON. Which I’m pretty sure is almost completely fact.

The molecular car will make it a lot easier to take trips to the nano-supermarket, as well as for subatomic nuclear families to bond by taking road trips to the other side of the needle head.

Does This Bunting Make Me Look Fat?

Yeah, probably. It's either the bunting, or you're just fat.  What?  Did I say something?

Ladies and gentlemen, there’s a big problem in this country, and that problem is the Christmas tree. Specifically the public image thereof, at least according to a new Federal government mandate that’s imposing a 15-cent Christmas tree fee on the sale of fresh cut trees.  The mandate is meant to help “enhance the image of Christmas trees and the Christmas tree industry in the United States.”

I didn’t think so initially, but then I went and visited my local neighborhood Christmas tree and, well…

Things aren’t going so well I guess. I mean, I can understand the heroin and the moonshine, but cigarettes, Mr Tree? Cigarettes?!

And yea, on the eleventh day of the eleventh month of the eleventh year, a child turned eleven. Naturally, I hereby pledge my undying allegiance to our new overlord. All hail John Biscaro, master of numerology and amateur flautist. Submit or be destroyed.

For those of you concerned, or looking for a forecast of the amount of Crazy we can expect this week, the national Bachmann Level is YELLOW!

As you can see: 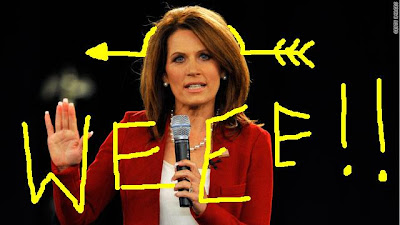 During these conditions, you can expect Michelle Bachmann to wield the term 'Socialist' like Joe McCarthy's old school dropping the beat and spitting out the red scare rhymes.  You know, back before Communism got commercial.

Suggestions: wear your protective headgear to keep out the shrill when in public, and avoiding looking pant suit wearers in the eye at all costs.
Posted by Unknown at 3:51 PM No comments:

Friday: The Blog Returns From The Dead...

...to hump you, or at least offer, and smoke a cigarette while it steals your beard.

Well, Patriots, this November is election season, when all Americans of voting age head to the ballot box to elect the next President of the United States.

Oh wait, that’s next year? Then why the hell have there already been, like, nine debates already?! Do these people not have anything better to do?

Turns out, the answer to that question is ‘nope!’ Although I suppose Herman Cain could go back to denying claims of naughtiness, or film making!

The smoking actually doesn’t bother me at all. The wide eyed crazy and the complete and total lack of anything specific does, though. The smoking is just lovely nicotine icing atop a cake made of bizarre. “Let’s do this shit! Who’s with me? What are we doing? Something about nines! Smoke ‘em if you got ‘em and cue the music!”

The Republican Primaries, or The Search for Someone Who Isn’t Creepy or Crazy.

And now, a quick Friday Jaunt Around The Internet. I hereby dub the following...

Do ghosts get it on? Apparently they do in Euclid, OH (the ghost sex capital of the Midwest!), where four year old pornographer Kimora caught two apparitions in flagrante delicto deceased. Personally, I’m glad to see that the corporeal urges stay with us post corpse. Although, I’d like to think I’d wait until the four year old with the camera phone isn’t snapping pictures of me and my pasty white ghost ass in someone’s nasty living room.

As a side note, God bless you local news! In Chicago, we get a bunch of incredibly horrendous crimes, but elsewhere in our fair country you get some pretty entertaining attempts at killing broadcast time.

Speaking of local news and incredibly old things having sex…

If You Got It, Grampa, Flaunt It:

This one ties into pretty much everything we’ve talked about so far. Politics? The dude’s running for city council, so check. Incredibly old/possibly dead things? 83 years old, so check. Kind of out in the middle of nowhere? Centerville, Iowa? Check.

Hanky panky? Well, attempted at least. Pay attention to the verbiage of this:

“Ben Clifford Dawson, 83, of Centerville, was charged with prostitution and assault with the intent to commit sexual abuse after he allegedly offered to let a 33-year-old woman repay part of a $7,000 loan by allowing him to perform sex acts on her.”

Again, read the “by allowing him to perform sex acts on her” and now let your imagination run wild.

This is akin to the bank coming up to you and saying ‘look, I know you still owe tens of thousands of dollars on your loans, but how about we forgive all that and I give you a nice BJ?’

“Troyer believes that he and his wife were lured into a cult made up of breakaway members of the larger Amish community near Bergholz in rural eastern Ohio. He said it was – and still is – ruled with an iron fist by his former father-in-law, Sam Mullet, a man who Troyer and others say is anything but a typical Amish leader.”

Compare and contrast.  Please show your work.
Posted by Unknown at 9:45 AM No comments: