...towards one Rick 'Fucktard' Perry.

Since last we spoke, I was headed off to my holiday party. I would like to give you an account of what all took place. Really, I would. Unfortunately, I can’t remember much of it. Funny thing about Manhattans, that.


So, in lieu of the recounting of drunken exploits, I humbly offer outrage and the outrageous in this week’s Friday Jaunt Around The Internet, which I have entitled:


Outrage, Frustration, Outstration
They can’t all be gems, people. Sometimes it’s just a rock, but you throw it anyway because you have to throw something.

I’m not going to embed the video here, because I don’t want that shit on my blog, but here’s the link. Go listen, and then come back. I’ll still be here.

Welcome back. Did you listen to that shit? I mean, what the fuck, Rick?

“You know something’s wrong when we allow sodomites to risk their lives in the service of our country to protect the freedoms and liberties we hold dear, while kids are not forced to pray in school because of one of the founding principles of our country (SEPARATION OF CHURCH AND STATE) which I’m conveniently forgetting about right now. I should add, though, that we’re all still allowed to freely celebrate what has become a multi-million dollar industry in this country on our own time, while those same sodomites are marginalized by jackholes like me.”

War on religion? Show me one piece of legislation Obama has recommended to Congress or one executive order that has had a meaningful, impactful effect on freedom of religion in this country. You can’t do that, Rick, and you know why? Because you can’t even remember key parts of your own platform, like what State Departments you would get rid of, you dumb piece of shit.

And the worst part about this? Rick may or may not even give a damn about prayer in school or gays in the military. But he’s counting on you, the voting public of America, to be so fucking dumb and pigheaded and ignorant that you’ll think ‘gays’ and ‘public displays of prayer’ and ‘ignorance’ are important enough issues to be worth a vote. Because he’s cynical, and is willing to play on evil shit so that he can hopefully weasel his way into a position of sucking personal gain out of the most important and powerful job in the country.

If there's any justice in this world, Perry has pretty much written himself out of ever occupying the Oval.  Unfortunately, as anyone who's lived on this rock for a while can tell you, the world can be pretty unjust.

When I pray (and I do; I’m not ashamed to admit I’m a Christian, albeit a poor one who seldom practices), I pray God that my God is not the same God to which Rick Perry prays.

For what it's worth, I’m pretty sure they’re different.

Many, many years ago, Michigan went to war with Ohio over the rights to Toledo. Yes, at one point in time, Toledo was considered something of a prized jewel worth fighting over, instead of being, like, Toledo.

Granted, the combatants were likely drunken lumberjack types with little else to do when not jacking lumber, but still. Sometimes you have to stand up for your state. And no, Toledo is not part of Michigan now. But as a reward for making a big deal out of it, Michigan was given the entire Upper Peninsula to largely marginalize and ignore, until such time as copper and iron was discovered. And thus, the Mitten came out on top for their troubles.


But now apparently the very Mittenness of the Mitt is being questioned. By Wisconsin, of all states. That cheese eating, sausage loving, fish frying, beer swilling (note: none of these are insults; I love all of those things) bunch of Green Bay Packer fans dare question the supreme handiness of Michigan?
Yes, Wisconsin, your state does look like a mitten. Provided that mitten accommodates a grossly deformed pinky the size and shape of a cauliflower. However, for those of us without fingers that bulge off at weird angles from the rest of our hand, it’s Michigan. I mean, let’s take the arbitrary state lines out of the equation here and just look at the geographic facts, dudes:
The gigantic red swaths of land that miraculously spell out what’s what with arrows and letters are something of a geologic miracle.
At the end of the day, and in the spirit of our forefathers, I would be willing to concede Mittenhood provided we are promised the entirety of Canada or a gigantic load of free sausage. Your move, Wisconsin.
NEW MEMES!!

And oh God how I love new memes (talking about my God, not Rick’s; Rick’s God probably has a sense of humor limited to farts and patronizing ethnic jokes). The newest meme comes courtesy of meme-master Casey, who is like my technologically savvy nephew. Except he’s my age. I guess what I’m saying is, he’s good at the internet and I’m already an old man. Regardless, here’s this: 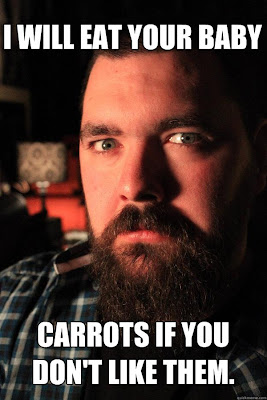 Other brilliant pieces of photoshopped wit reside here, including one for the Corpse Bride that I don’t want to ruin for you.
Posted by Unknown at 10:02 AM