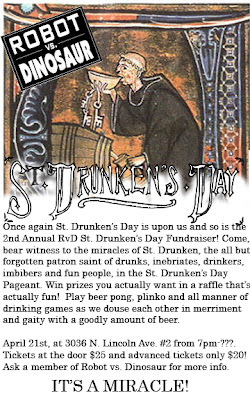 For those of you who are uninitiated, St. Drunken’s Day is a religious drinking holiday that was completely made up by we inebriates of Robot vs Dinosaur. The kernel of the idea came from a post I wrote in 2009 to kind of lampoon what St. Patrick’s Day has become – essentially, an excuse to put on some green t-shirts and go make asses of ourselves in public – and invented some fake old timey sounding quotes, such as:

He reportedly is the first person to urinate on a building. Quoth Saint Drunken, "I hath Christyned meself with all the holy spriryts I maye, and anon I Christyn thee, ye Bush that doth sit tidily beneath the Pryor's window, with what remaynes."*


Well now we at RvD use it as a fundraiser and, more importantly, as an excuse to drink beer with friends and play plinko drinking games.

This is our second year holding festivities. Last year was a hell of a lot of fun, and I see no reason why this year’s celebration, which is essentially the exact same format, wouldn’t be just as fun. There’s a pageant, some games, a silent auction for drunken artwork, a raffle and general tomfoolery. Here are the details:

You can buy tickets from me, either in person or you can email me and I’ll work out reserving you some tickets. Or leave a comment here to get my attention.